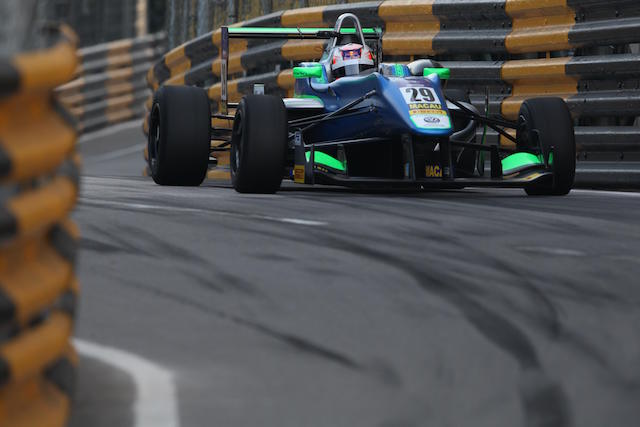 The 2012 winner took the lead away from the British teenager at the restart following?an early safety car period.

The race start was delayed by around an hour as officials tried to dry?water on track in the braking zone at Lisboa, blown off the grandstands following earlier rain, and when it did eventually get?going, it only took until Mandarin bend for an incident to bring the race under safety car.

Several drivers got wide through the high-speed right-hander and smacked?the outside barrier, with Maximilian Gunther followed in by?Anthoine Hubert and Lando Norris.

With debris from Norris’ car in particular sent flying over the track, some of those behind checked up and Ye Hong Li was launched over the back of his B-Max team-mate?Daiki Sasiki.

In a scary moment, Sasaki came extremely close to being struck on the head by the wheel of Ye’s car as it twisted through the air overhead. Thankfully, the Japanese racer escaped unscathed and was able to rejoin and finish two laps down. Gunther, Hubert and Norris were all forced to retire.

Despite a poor getaway from?second on the grid, Ilott had slipstreamed into?the lead heading into Mandarin for the first time ahead of third-place starter Felix da Costa, but was powerless to prevent the Portuguese racer drafting?past on the long run?to Lisboa when the race restarted at the end of lap four.

Felix da Costa opened up a 1.1-second lead in that first green-flag lap, and was able to respond when Ilott brought it down to seven?tenths next time around.

The 18-year-old kept up the pursuit, posting the fastest lap of the race on the ninth and penultimate tour, but he had to settle for second, 0.85s behind Felix da Costa.

Sergio Sette Camara?got a great launch from fourth on the grid to challenge?polesitter?George Russell?for the lead through the first corner before Ilott and Felix da Costa got by.

The Red Bull Junior occupied third for the remaining distance, finishing five seconds behind the winner.

Russell got a good initial getaway but was relegated to fourth by Lisboa for the first time, and was passed by?Kenta Yamashita at the same point on the penultimate lap but managed to then keep?Felix Rosenqvist at bay until the flag.

Nick Cassidy was side-by-side with Prema team-mate Rosenqvist at the restart, but was passed by?Daniel Juncadella in the middle of the race and then fell to 11th on the final lap.

Taking advantage were the two Double R cars, with F3 newcomer and recent racing returnee?Dan Ticktum impressing to take eighth ahead of his veteran team-mate?Alexander Sims.

Jake Hughes lost ground on the first lap but completed the top 10.