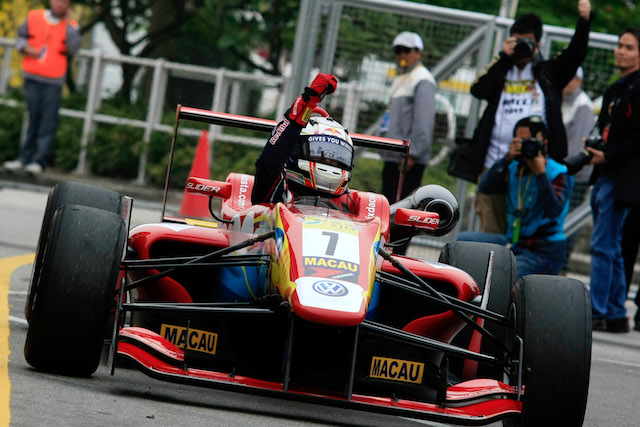 Macau Grand Prix winner Antonio Felix da Costa will return to the race this year with Carlin, which has also added Sergio Sette Camara to its line-up.

He joins fellow former winners and DTM drivers Daniel Juncadella (Hitech) and Felix Rosenqvist (Prema) on the entry list, with another BMW-contracted veteran Alexander Sims will race for Double R.

“There is no aim as such in going back for me,” said the Portuguese driver.

“I?m just doing it for the love of the sport, so when I got the call from Trevor a few weeks ago I couldn?t say no.”

Sette Camara joins Carlin after two seasons with Motopark, the latter as a Red Bull Junior.

The Brazilian posted the fastest lap – and an F3 lap record – at the end of last year’s Macau race.

Lando Norris and Jake Hughes are now officially confirmed by the team for their Macau debuts after racing in the European F3 finale at Hockenheim.

Peter Li Zhi Cong was on the original entry list but will not be ready to make his return after his Red Bull Ring crash.

Nonetheless, Carlin – having not had?any drivers at?two late-season European rounds – will field four cars in Macau, the only team currently set to do so. Most squads have usually run a maximum of three over recent years, although Carlin has entered additional cars under the Jagonya Ayam banner.

Another addition to the entry list is Carlin Euroformula Open regular Keyvan Andres, who is down?to join David Beckmann at Mucke Motorsport having tested for other FIA F3 outfits in the past week.