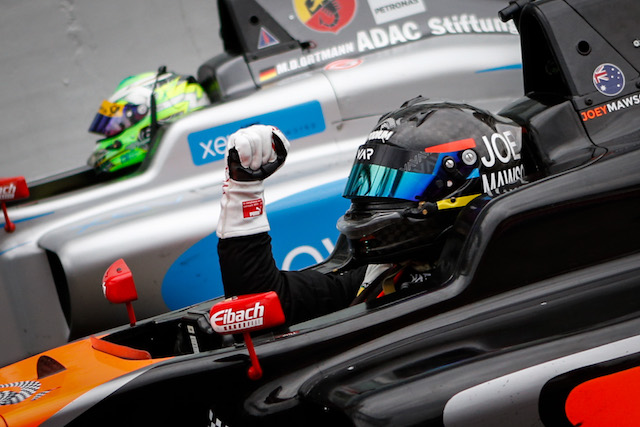 ADAC Formula 4 champion?Joey Mawson will be one of several successful drivers competing in the BRDC British Formula 3 Autumn Trophy this weekend.

Mawson will drive for Douglas Motorsport in the four-race tournament at Snetterton, effectively replacing fellow Australian Thomas Randle, who finished fourth in the series with the team this year and will be making his Formula V8 3.5 debit at Jerez this weekend with Comtec.

“The opportunity came as a bit of a surprise,” said Mawson, who hopes to graduate to European F3 with Van Amersfoort Racing next year.

“Mentally I had already started to focus on the off season and onto winter testing. Now it?s quickly back to focusing on a race weekend.

?It?s a great opportunity to be back in a car again and have a race meeting while learning a new track at the same time.

?I?ve never driven the BRDC Formula 3 car before, although there are some things that will be familiar like the Pirelli tyres.

?It will be nice to drive a slightly faster car as I prepare for the next step in my career during 2017.?

Alongside Mawson at Douglas will be Jamie Caroline, who raced in British F4 this season and?effectively replaces Edge management stable-mate Enaam Ahmed, who moves over to Carlin.

Carlin will also run its own F4 graduate James Pull – who made his F3 debut at the Donington season finale – and inaugural American F4 champion Cameron Das.

Sixteen-year-old Das has also raced in USF2000, where Carlin will compete for the first time in 2017.

Elsewhere, after contesting the European F3 finale at Hockenheim with Carlin, Dan Ticktum makes the next step of his racing return with the Double R team that he is set to race for in Macau next month.

Callan O’Keeffe, who has made just one Formula Renault appearance in 2016, will drive for Fortec Motorsports together with Ben Hingeley, a podium-finisher with HHC this season.