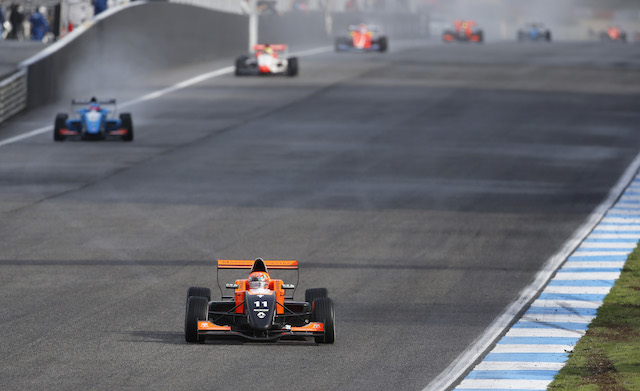 Sacha Fenestraz scored the second win of his rookie Eurocup Formula Renault campaign in the final race of the year at a wet but drying Estoril.

With the majority of cars starting on rain tyres, polesitter Fenestraz made a good enough start to cover off the two drivers that started directly behind him,?Max Defourny and?Lando Norris.

He was however challenged in the braking zone by fast-starting home?driver Henrique Chaves, who nosed his AVF car ahead as they turned through?Turn 1.

Fenestraz got the better drive on the outside line however to reclaim the lead, and Chaves was edged back down to third by Defourny a few corners later.

Defourny couldn’t take the challenge to Fenestraz however, who posted a series of fastest laps to open up a lead of nearly four seconds.

Champion Norris took until lap five?to get ahead of Chaves, but then quickly closed on Defourny, who he collided with on the last lap of race one.

He cleared the Belgian down the inside of Turn 3 on lap 12 of an eventual 13, and immediately took six tenths out of Fenestraz’s advantage over the remainder of that tour.

He continued to cut away at the Franco-Argentine’s advantage but ran out of laps, with Tech 1 driver Fenestraz winning by 1.9s to add to his Monaco victory. All three of his victories across Eurocup and NEC this year came in wet conditions.

Third for Defourny was enough to beat?Harrison Scott?to third in the final standings, but he couldn’t stop?Dorian Boccolacci securing second.

The Frenchman passed?Chaves for fourth place late in the race, with the Portuguese driver just holding on to fifth in the end ahead of?Robert Shwartzman.

Having qualified down in 16th place, race one winner?Will Palmer gambled on slicks at the start of the race, but lost time with a spin and didn’t start matching the pace of those ahead until there were only five minutes remaining.

By the end of the race he was quicker than anyone else, but he was a minute and a half off the lead before pitting on the final lap.