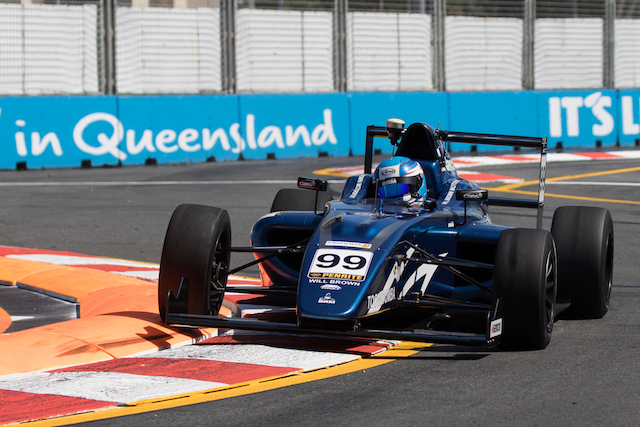 Will Brown?claimed the second Australian Formula 4 title at the final round of the season in Surfers Paradise.

The 21-year-old, who finished third overall and top rookie in the inaugural season in 2015, led the standings for much of the year, only briefly headed after a?Jordan Love double at round two at Philip Island.

Inside the first four rounds, Brown’s only wins came in three reverse-grid races, but he was on the podium in nine of those 12 races and never outside the top five.

At the penultimate round at Sandown he then won the two ‘main’ races, and it could have been a hat-trick had he not been excluded from race two for a technical infringement – his only non top-five result?of the year.

That forced the title to the final round at Surfers Paradise, where Brown took victory in race one, then clinched the title with fourth in race two before rounding out the year with second in the finale.

AsiaCup champion Love won four of the first six races but didn’t do so again and ended up third in front of?Harry Hayek, who took three wins (a Queensland Raceway double and the Surfers finale) from 12 starts having returned after an aborted British F4 campaign.

Top rookie honours and went down to the wire between 16-year-olds?Josh Denton and?Simon Fallon.

Denton looked in a good position four places and 42 points ahead of Fallon after picking up his first win when Brown was excluded at Sandown, but he scored just 14 points in the remaining four races.

Fallon, who missed the opening round, meanwhile enjoyed a very strong final round, winning race two and coming fourth in the two main races to overhaul at the last opportunity.