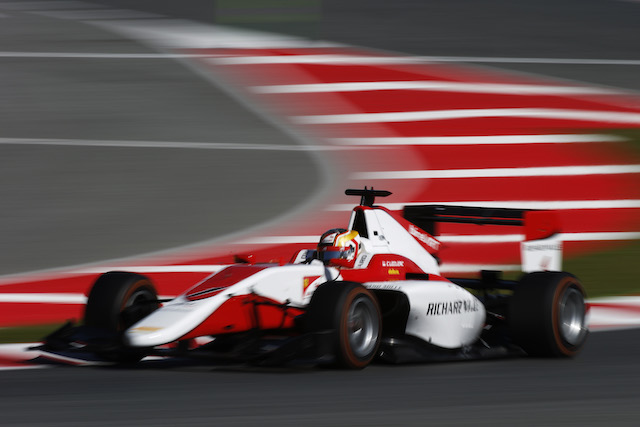 Charles Leclerc took a commanding victory in the first race for the brand new GP3 car at Barcelona after a flying start from third on the grid.

Jake Hughes seemed to make a good getaway from pole position but it wasn’t as good as the launch from Leclerc, who was able to pull past into the lead before the first corner.

Hughes clung onto the ART driver through the first couple of laps but Leclerc then gradually pulled away, winning by?six seconds.

Honda protege?Nirei Fukuzumi?finished on the podium in his first ever race in Europe after gaining a place off the start.

Antonio Fuoco went from seventh to fourth at the start and held onto the place despite finishing 12s behind Fukuzumi.?Kevin Jorg slipped from second to fifth with a bad first lap.

Hopes that the new GP3/16 car would create better racing were left unfulfilled in a processional race. Many cars were?able to follow each other, but tyre degradation was limited and overtaking rare.

Alex Albon, having gained a place when?Jake Dennis went wide at the end of the first lap, was able to dive down the inside of Jorg at Turn 10 early on, but he went too deep and had to concede.

Oscar Tunjo spent most of the race close to Dennis but had to settle for eighth and reverse grid pole, in front of a muted?Nyck de Vries. Ralph Boschung took the final point ahead of?Koiranen team-mates?Matevos Isaakyan and?Matt Parry.

Jack Aitken stalled out of 10th place on the grid, leaving him to trail home in 20th on the tail of?Alex Palou.