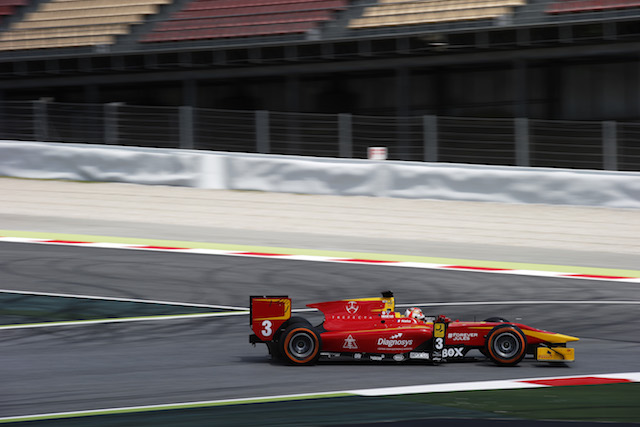 Norman Nato?took his maiden GP2 victory in the 2016 season opener at Barcelona with a pass?on?Pierre Gasly towards the end of the race.

Gasly had led pretty much uncontested from the start of the race, seemingly on course for his first race win since 2013.

He led Nato by over half a second when?Sergey Sirotkin spun and stalled at Turn 2 in his race-long attempts to attacked Nato, having climbed from fifth to third at the start past DAMS driver?Alex Lynn and?Nicholas Latifi.

The safety car was needed to retrieve the stranded ART Grand Prix car, at which point those that started the race on the hard tyre came into the pits for their mandatory stop.

Gasly emerged?with his lead intact, but when the race restarted with 11 laps to go, he was attacked into Turn 10 by an opportunistic lunge from Nato.

The French drivers banged wheels as Nato worked his way past, and the Racing Engineering man immediately set the fastest lap of the race on the next tour and opened up a 1.2-second lead over Gasly, who was struggling to get the soft tyres to work and under pressure from Latifi.

Canadian driver Latifi, starting his first full season in GP2, was able to use his superior speed to drag past Gasly on DRS down the pit straight and claim second before the race ended under safety car conditions when?Raffaele Marciello was punted out of eighth place at Turn 4 by fellow Italian?Antonio Giovinazzi.

Artem Markelov produced a typically attacking drive to finish fourth, having been seventh at the restart. The Russian pounced on?Jordan King?into Turn 1, then took Lynn at Turn 5.

Sergio Canamasas, running well in?his last-minute drive for Carlin, was much harder to pass on similar fresh soft tyres, but Markelov did eventually find a way past for fourth and was pressuring the struggling Gasly when the race was neutralised early, with the Frenchman at least securing a podium for Prema in its maiden GP2 race.

Lynn had started on the soft tyres and suffered a slow early pitstop that left him 40 seconds off leader Gasly for a large part of the race, and although he was initially slow at the restart compared to those on fresh tyres, he was able to recover fifth with a move on Canamasas.

King was seventh, with Giovinazzi crossing the line eighth but highly?unlikely to be allowed by the stewards to keep hold of a debut eighth place and reverse-grid pole.?Gustav Malja and?Oliver Rowland completed the provisional top 10, the latter surviving a bumpy trip across the Turns 1/2 run-off on the first lap.

Behind him, GP3 graduate?Luca Ghiotto?suffered a puncture in first-lap contact and slid?off into the Turn 3 gravel trap, causing a safety car.

UPDATE:?The chequered flag was shown a lap early, meaning the results were rolled back by another lap. That?negates Lynn’s pass on Canamasas for fifth and means Marciello holds on to eighth. Giovinazzi was still penalised, relegated to 14th.