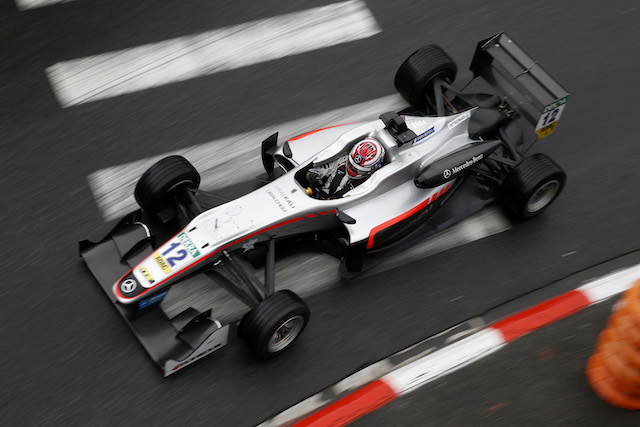 George Russell tamed the dampened streets of Pau to win the second of three FIA Formula 3 European Championships?races at the legendary street circuit.

From pole position, Russell completed the grand chelem by leading all 25 laps and setting the fastest lap of the race, under conditions that caught many other drivers out.

Nick Cassidy and?Guanyu Zhou each picked up punctures within the first 12?laps, forcing Zhou to retire and relegating Cassidy to 16th and last of the finishers.

A number of drivers suffered hard crashes – first,?Ryan Tveter wrote off his Carlin on lap 6.?Alessio Lorandi, who starts Sunday’s main race on pole position, picked up a left rear puncture after he clipped the wall while running third.

Then another hard crash, this time for?Pedro Piquet on lap 13, brought out the first safety car. The race restarted on lap 17, but it wouldn’t take but two more laps before?Harrison Newey in another Van Amersfoort Racing entry shunted the barriers at lap 19.?David Beckmann suffered heavy rear wing damage, ending his day prematurely after climbing into the points.

Behind Russell,?Sergio Sette Camara got a great start and held onto second place for his best career F3 result, and his first podium as a Red Bull Junior Team driver.

His Red Bull predecessor,?Callum Ilott, completed the podium, with?Lance Stroll finishing fourth, and top rookie?Ben Barnicoat?coming in fifth off the back of two consecutive victories.

Joel Eriksson?came ninth, and?Arjun Maini completed the top ten to pick up his very first points of a frustrating 2016 campaign with the upstart Threebond with T-Sport team.

Maximilian Gunther lost out on a chance to climb from 19th on the grid into the points after a late incident, he would be forced to settle for 14th place.

Tomorrow’s third and final race of the weekend will determine the overall winner of the historic Pau Grand Prix.