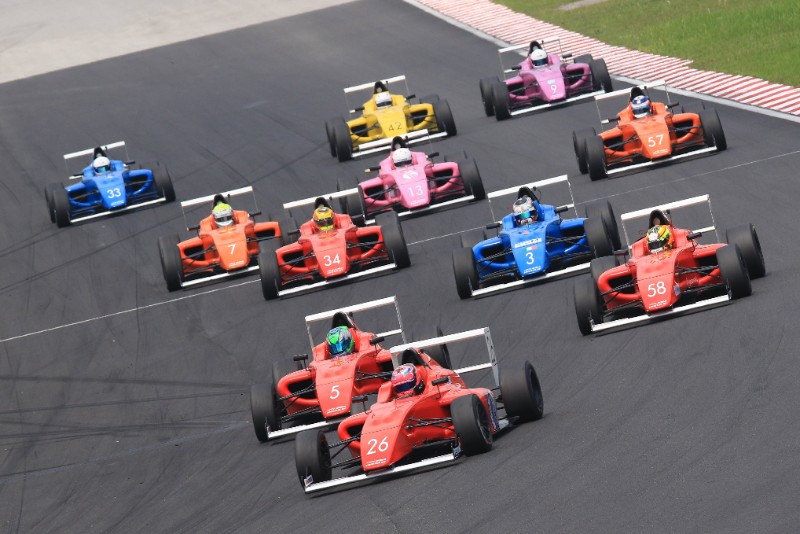 Hadrien David dominated at on his return to Formula 4 South East Asia, winning three of the four races at Sepang while Elias Seppanen extended his points lead.

David contested the 2019 season opener at Sepang and won three times. The Frenchman did even better on his return, as he took pole position for races one and four, as well as winning the first three races of the weekend.

He lost the lead of race four to eventual winner Josh Smith – who missed the two most recent Madras rounds – on lap three of nine, but he still came home in second place after holding off Seppanen’s title rival Lucca Allen.

Allen finished on the podium twice, once more than Seppanen, but a retirement in race three for the Irishman meant that Seppanen was able to extend his championship lead to 14 points.

Shibab Al-Habsi and Muizz Musyaffa were the two other drivers to finish on the podium over the weekend. Al-Habsi took third place on a wet track in race three but was behind Musyaffa – who also came home second in race two – at the chequered flag.

The championship standings for the top five remain unchanged, with French F4 leader David moving up to seventh.

In Denmark, Malthe Jakobsen took over the points lead in the national championship from Jonas Lindhard Nielsen after winning all three races.

Jakobsen took pole at Padborg Park by just 0.032 seconds, but proceeded to dominate proceedings and take the points lead despite missing the season opener, held at the same circuit.

Although Nielsen missed out on a podium position after being far off Mikkel Grundtvig, he managed to rebound to finish second in race two and third in race three.

Valdemar Eriksen was close to beating Jakobsen to pole and was less than a second away at the chequered flag for race three. He also finished in second place in race one.

Juha Fred relived his younger days in the Formula Academy Finland round at Kemora, taking his Formula Ford car to a pole and win.

The Finn, who raced in the country’s previous F4 championship last century, only lasted a lap in the wet first race before retiring from pole.

Markus Laitala took a dominant victory, with Jimi Hannus and Nikita Alexandrov the only other drivers left on the lead lap. Fred struck back by bettering Laitala in sunny conditions in race two, but the latter extended his points lead as the top FAF entrant.