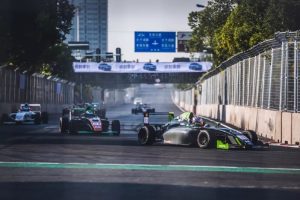 European and Asian Formula 3 driver Charles Leong made a return to Chinese Formula 4 last weekend at the Wuhan Street Circuit.

The 2017 champion reunited with his old BlackArts Racing team, and looked off the pace in qualifying as Zheng Wancheng beat championship leader Jordan Dempsey to pole by 0.005 seconds.

Both crashed out in the first race though, caught out on the slippery off-line part of the circuit, which had never held a single-seater race before. Dempsey was injured in the crash, but was able to contest the remaining two races.

“Unfortunately I made a mistake and typical of a street track I hit the wall but didn?t get my hands off the wheel so hit my finger off the monocoque,” Dempsey explained to Formula Scout, revealing he had broken a finger.

The race finished under safety car as a result, with Leong heading Dempsey’s title rival Lup Yufeng and 2015 Asian Formula Renault champion Dan Wells, who survived a clash to finish third. He Zijian was fourth, with Tai Yi taking his best result of the season just behind.

Race two was a straight battle between Leong and Wells, whose driver coaching of Leong was put to great use as the Macanese driver took his 14th victory. Yufeng cut Dempsey’s points lead in third, with the Irishman racing from the back to take fourth and fastest lap.

Shang Zongyi took victory from third on the grid in the final race. Dempsey made slow progress to take second, ahead of an intense battle between Yufeng, Leong and Wells.

The Team FSP driver also took pole, and ends the season with a 119 point lead over Casper Pilgaard, who took three second places in the final round. Pilgaard was the only other driver who could challenge Hansen, and Aske Nygaard Bramming only managed one distant podium on his way to third in the standings. The FSP driver has a United States F4 debut at the US Grand Prix to look forward to though.

Surprisingly Formula 5 driver Mads Hoe took pole and ended up finishing third in the first race, securing him the F5 title. Hoe took another easy F5 win in the second race, while title rival Martin Harritz triumphed in the finale ahead of Lucas Daugaard.

Formula Academy Sudamericana arguably had its strongest grid yet at Londrina, and it was Nathan Brito who took both wins. The 15-year-old debutant mastered the damp conditions, winning both races by a significant margin from USF2000 driver Bruna Tomaselli.

Brito took pole, but had to fight his way back into the lead in both races. Bruno Testa and Juan Vieira completed the podium in each encounter, while championship leader Leandro Guedes played it safe with two fourths.