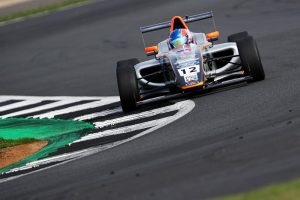 Simmons finished his third year in British F4 second in the standings, winning four times for JHR Developments. He also made his British F3 debut with Chris Dittmann Racing at Spa-Francorchamps, qualifying just 0.142 seconds off pole in fourth place at a track he had never seen before.

He followed that up with a fourth place finish, and returned to the championship at Donington Park, where he qualified third and picked up two sixths and a seventh.

“I think chipping in the F3 helped [for F4],” Simmons told Formula Scout. “Some good experience there and confidence as well.

“It’s been refreshing to get out of F4. Just driving, no pressure, which I haven?t had a chance to in a long while.

“Everytime I?ve jumped in the F3, we knew nobody was expecting big things from us. But we?ve gone against the odds. We qualified third at Donington, my first time there in the dry.

“So yeah, it is refreshing in a way, just driving with no stress and however I want really. In F4 it?s just so intense and you?ve got to keep an eye in, you?ve always got to be right up there for the championship.”

Simmons will also contest the British F3 season finale at Silverstone this weekend, ahead of a potential full-time move to the championship next year. Plans for 2019 won’t be properly considered until Christmas time though according to the Anglo-Spaniard.