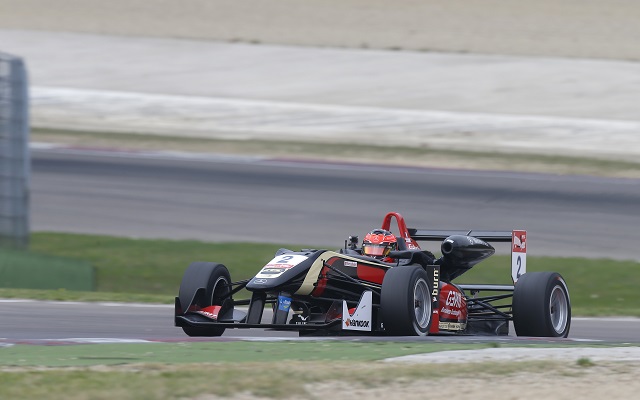 FIA F3 European Championship leader Esteban Ocon will start the first race of the penultimate round of the season at Imola from pole position.

The Frenchman claimed his 15th pole of the season, prevailing in a hectic qualifying session which saw the red flag come out on two separate occasions.

The first suspension of track activity took place with six minutes and 55 seconds remaining on the clock and was caused by Carlin’s Sean Gelael going off at turn five.

The session was restarted in due time but, as most drivers returned to the track and started their respective flyers, they were halted by the colour red again as T-Sport’s Alex Toril was caught out at turn 20.

With the timer frozen at two minutes, there was yet another restart, prompting a late dash of flyers.

Ocon, who led most of the second half of the session, managed to get back out and improve in the final seconds, albeit he’d find himself unchallenged for pole with either of his top laptimes.

The Prema Powerteam driver will be joined on row one by Carlin’s Antonio Giovinazzi, who previously took turns setting fastest laps with Ocon at the halfway point of the qualifying and eventually ended up a safe second.

A late rally from another Carlin driver Jordan King saw the Brit storm into third after the second red flag, demoting his compatriot and stablemate Tom Blomqvist to fourth.

Future Scuderia Toro Rosso driver Max Verstappen had to settle for fifth, with Felix Rosenqvist a further 0.01s off in sixth place, just ahead of Jake Dennis.

Verstappen will start 15th as he serves the second of three ten-place grid penalties for an engine change at the previous round at the Nurburgring.