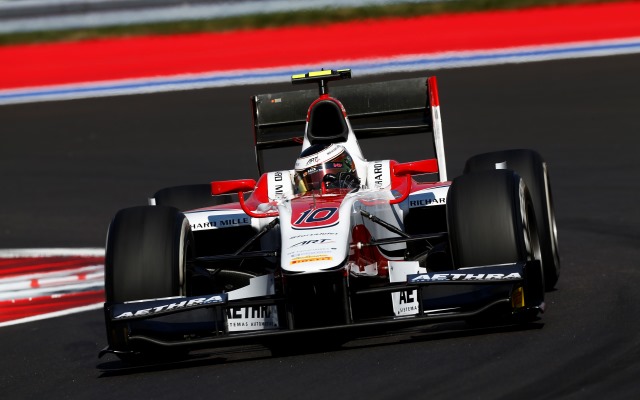 Stoffel Vandoorne claimed his third consecutive pole position in GP2 in Sochi as the championship’s maiden qualifying session in Russia came down to a thrilling dead heat between him and Arthur Pic.

Pic had gone to top spot with a couple of minutes remaining in the session, but his time was bettered by Vandoorne on the Belgian’s final flying lap.

Pic fought back though and matched Vandoorne’s time to a thousandth of a second, but will have to settle for second on the grid having set his time later – the pair therefore repeat the front row of the grid from the last round at Monza.

Vandoorne and the ART Grand Prix team dedicated their success to Jules Bianchi by showing off the #ForzaJules decal on Vandoorne’s helmet to the cameras. Bianchi spent four years driving for ART during his time in F3 and GP2.

Vandoorne’s team-mate Takuya Izawa put in a magnificent performance throughout the session, clearly benefiting from the level playing field created by racing on a new circuit having been at a disadvantage on the European tracks this year. He led the times for a while during the first half and then put in a late improvement to seal P3.

Championship leader Jolyon Palmer was another in the fight for pole, and led for some time during the middle of the session, but he would have to make do with fourth. Nonetheless, his main rival Felipe Nasr could only manage tenth, and Palmer only needs to outscore the Brazilian by eight points this weekend to wrap up the title.

Raffaele Marciello was fifth ahead of Mitch Evans, who appeared to have the pace for pole at the home event of his Russian Time team but failed to put a clean lap together.

Pic’s Campos team-mate Kimiya Sato was seventh ahead of Stefano Coletti, Andre Negrao and Nasr, who was tapped into a spin at the final corner by Coletti early in the session when the Carlin driver slowed.