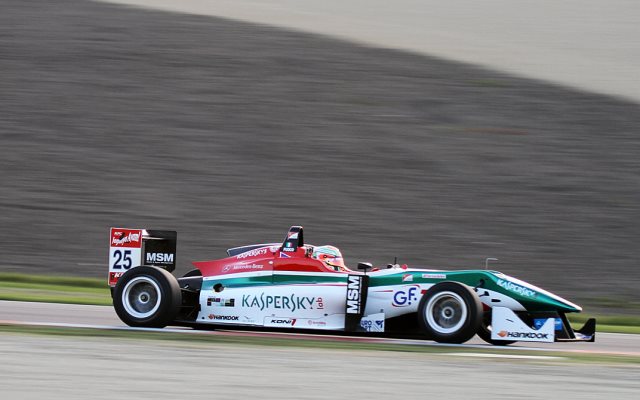 Ferrari protege Antonio Fuoco posted the fastest time of the two free practice sessions ahead of the penultimate round of the FIA F3 European Championship at Imola.

After keeping their power dry in the midweek test, home team Prema demonstrated their speed in practice, with championship leader Esteban Ocon leading the first session with a time of 1m37.120s.

Fuoco was 0.038s behind in second place, with fellow Italian Antonio Giovinazzi third for Carlin and Nicholas Latifi making it three Prema cars in the top four.

Tom Blomqvist and Jordan King kept up Carlin’s representation near the front in fifth and sixth. Max Verstappen had a relatively subdued first session in seventh, ahead of Sean Gelael, Felix Rosenqvist and T-Sport newcomer Nick Cassidy.

Fuoco became the only driver to dip below the 1m37s mark in session two. Verstappen was 0.144s behind in second place ahead of Ocon, Rosenqvist and Latifi.

After his promising showing in the test, Jake Dennis was sixth ahead of fellow Britons King, Blomqvist and Will Buller – the latter driving for Signature on their F3 return. Alexander Toril provided more top ten representation for T-Sport.

The sessions were interrupted by a number of red flags, including crashes early on for Santino Ferrucci and Lucas Auer, as well as Rosenqvist at the very end.