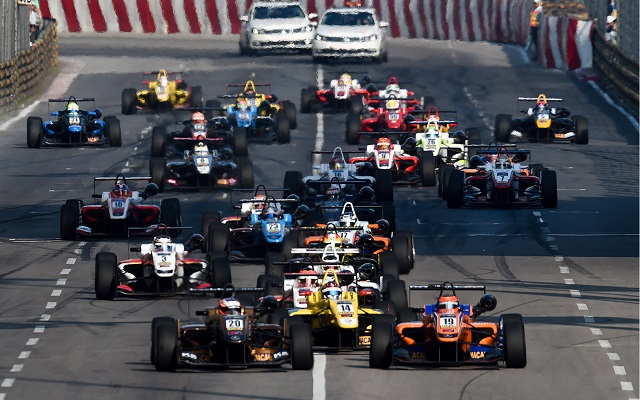 Rosenqvist will make his sixth consecutive appearance at the race as part of a three-car line-up for Prema Powerteam, which again runs in association with long-time Macau entrant Theodore Racing.

Joining him will be his full-season team-mates Jake Dennis and Lance Stroll, currently fourth and fifth respectively in the European series and both making their Macau debuts.

Nick Cassidy, who has been a part of Prema’s F3 line-up for the past couple of European events and finished third on his Macau debut last year, will line up with his Japanese series squad TOM’S.

Another of this year’s title contenders Charles Leclerc will be present with Van Amersfoort Racing alongside Alessio Lorandi, with two more rookies at Signature in Alex Albon and Dorian Boccolacci.

German squads Motopark and Mucke Motorsport will also enter two cars each, with the former?taking its leading duo of Markus Pommer and Sergio Sette Camara?while Mikkel Jensen and Santino Ferrucci (eighth last year) lining up for the latter.

Pietro Fittipaldi leads a three-car Fortec entry, together with Macau native Chang Wing Chung and the last British F3 champion Hongwei Cao, who have shared a car in the European series this year.

A number of drivers who normally race as part of the series’ bigger and more prominent teams will switch to others for Macau.

Ryan Tveter and Sam MacLeod (joint 22nd in the European standings) will line-up for West-Tec rather than with Carlin and Motopark respectively, while Fortec regular Li Zhi Cong switches to Jo Zeller Racing (which has run Ferrucci’s Mucke car this year).

Veteran Alexander Sims will join Rosenqvist in making it to a half-dozen Macau appearances (his best being fourth for T-Sport in 2013) by joining Double R Racing, who ran big-name Roberto Merhi to fourth last year.

Sims, who did a solitary F3 round last month at Portimao with the new Hitech GP entry, joins Double R regular Matt Solomon.

Joining Toyota-backed TOM’s as a Japanese entry is the Nissan-supported B-Max Racing squad, which will field title outsider Mitsunori Takaboshi for his second Macau GP and 27-year-old Yuhi Sekiguchi, who won the 2011 Japanese title for the team and finished fourth at Macau that year for Mucke.

Konstantin Tereshchenko to do Sochi GP3 round with Campos