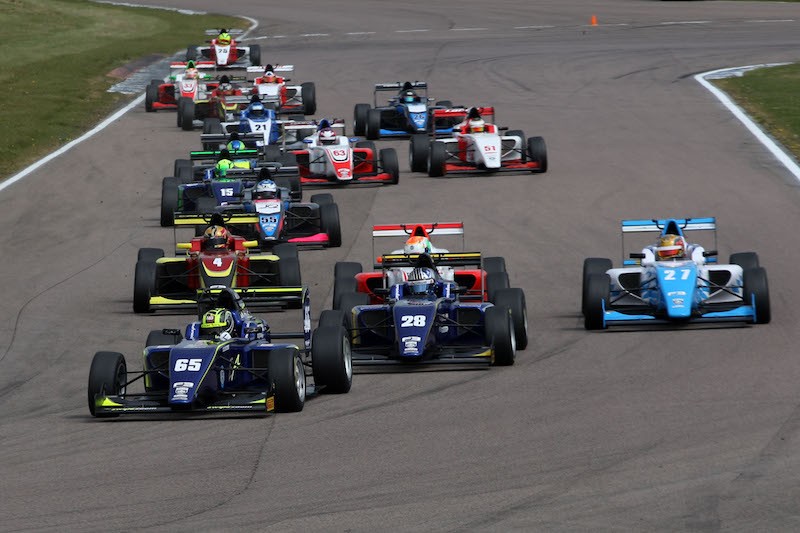 Enaam Ahmed continued his winning streak at the beginning of the BRDC British Formula 3 season with victory in race one at Rockingham by?charging from fourth to first within the opening turns.

In a repeat of round one at Oulton Park,?rookie Cameron Das stormed to pole by more than two tenths of a second with Carlin team-mate Ahmed only on the second row, and this time American driver Das got away well to keep the lead through the first corner.

Fellow front-row starter Omar Ismail did challenge for the lead into the Turn 2 hairpin, but on the outside line was shuffled down the order, as on the inside Ahmed climbed to second.

He then took the lead away from Das into Turn 3, and opened up a lead of nearly two seconds by the end of lap three.

Das came under pressure from Callan O’Keeffe early on, but was able to shake off the South African and start closing the gap to Ahmed.

He got the gap down below a second by mid-distance and, though Ahmed briefly responded, had reduced the deficit to 0.687s with three of the 14 laps to go.

Ahmed replied once more though to finish up one second clear.

O’Keeffe – who qualified fifth despite suspension failure leaving him with only a few minutes to set a time at the end – scored his second podium of the season in third, having cleared third-place qualifier Ben Hingeley on the first lap.

James Pull came from a disappointing ninth on the grid to finish fifth, passing Ismail on lap two.

Nicolai Kjaergaard made up three places to finish seventh ahead of Jamie Chadwick, who held off Double R team-mate Guilherme Samaia for eighth and reverse-grid pole for race two.

Having come into the weekend in seventh in the standings, Toby Sowery’s tough start to the season has continued at Rockingham. He qualified down in 11th (he had two quicker laps that were deleted for track limits abuse but would not have placed him any higher on the grid) and had to settle for 10th in the race on the tail of the Double R pair.