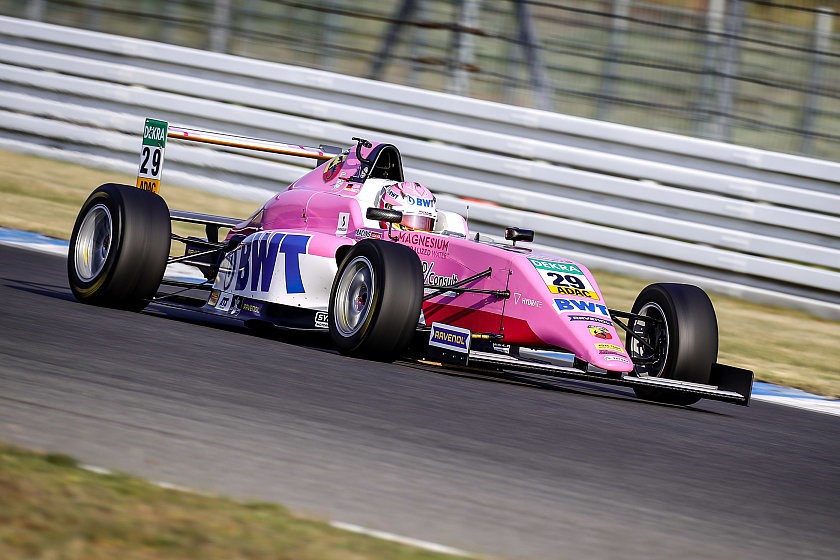 R-ace GP’s Bernier sat at the top of the timesheet in the early part of the session, and when US Racing’s Tim Tramnitz and Ollie Bearman did beat his provisional pole lap with four minutes to go, he responded quickly to reclaim first place.

He then stayed there until there was just two-and-a-half minutes left of the session, when Prema’s Gabriele Mini set a rapid lap to move ahead. This time Bernier couldn’t respond, and he was shuffled down to third again when Van Amersfoort Racing’s Jak Crawford set a personal best with 72 seconds left on the clock.

The track was getting faster, and the third US Racing car of Elias Seppanen jumped up to second place with 12 seconds to go. Crawford and his team-mate Jonny Edgar improved their best laptimes, but not their positions, shortly afterwards in third and fourth, and there was no change until almost a minute after the chequered flag had been waved when Duerksen set a lap 0.108s faster than Mini’s to take pole.

Mini replied with the fastest time in the second qualifying session.

Bearman was the early pacesetter, lowing the fastest time of qualifying to 1m41.189s, and while his team-mates came close to him nobody could beat him by the time the chequered flag fell.

Tramnitz was closest to him at this point, 0.119s behind, but lost his front row spot after one last flying lap after the clock had ran down put Mini on top by 0.061s.

Further down the order, Edgar had been flying on his final lap of the session, going quicker than anybody in the first and second sector, but a slow sector three meant he could only put himself fifth quickest, behind US Racing’s Vlad Lomko.

Montoya was again the second best Prema, as Ferrari Dino Beganovic looked quick early on but fell down the order to ninth.

Mucke Motorsport’s Duerksen this time was only eighth fastest, and 0.245s off pole in a closely contested session.