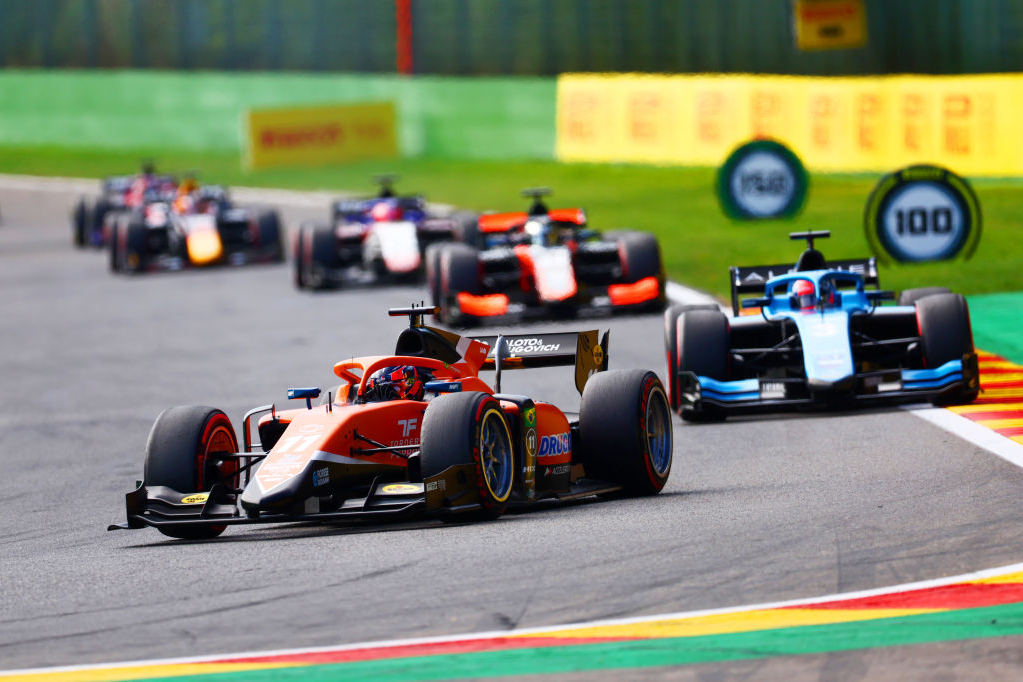 Despite leading almost entirely unopposed since the second round of the season, Felipe Drugovich did not start thinking the Formula 2 title was possible until round 11 at Spa-Francorchamps.

The MP Motorsport driver built up a big championship lead with feature race wins in Jeddah, Barcelona and Monaco, as well as sprint race victory at Barcelona too, and in last month’s Spa round he claimed his third pole and eighth podium of the year.

Drugovich won the title from the sidelines last Saturday after retiring early in the Monza sprint race, only the second time this season he has failed to score in a race, and spoke about a crowning that at first looked unlikely but then became inevitable.

“Obviously you start thinking about it [wanting to win the title] very early in the championship, but you try not to,” he said after becoming champion.

“But I think when you actually realise you can get it, it’s something really special. And I think it was around Spa when I got a gap again and I saw we came back from the break very well, so then I really thought it was possible. And even though it was already I think almost the end of the championship, it was [the 11th] round, I think there I really decided to think about it.”

Spa came after a month-long summer break and an intense July before that where Drugovich had only made the podium once in four rounds and doubts had started to creep into his F2 title dream.

“I think throughout the month of July when we had four race weekends in a month, we felt we lost a bit of performance and we were losing that lead in the championship,” he explained.

“Obviously it wasn’t the end of the world because we were still up there and with some points gap, but it’s never nice to see the others improving and you staying there. But at the same time, I think that was something that needed to happen so we could actually work on the summer break and come back stronger.”

MP team boss Sander Dorsman echoed Drugovich’s comments, telling Formula Scout the “feet on the ground” approach the team took was “just do your best and see where you end up”, and that feeling more competitive after the summer break had a big impact.

“We had some back-to-backs before the summer break, which were not race wins, but we still scored good points. Then to bounce back like we did after the summer break in Spa and Zandvoort was for us amazing. I think it was super important to bounce back, and take double pole and win races.”

When Formula 1 reached Spa, there was lots of silly season talk and Drugovich spoke with several teams.

A lucrative IndyCar seat was known to have been possible for 2023, but no certainty surrounded that option, and Drugovich signed to be Aston Martin’s F1 reserve driver after becoming F2 champion.