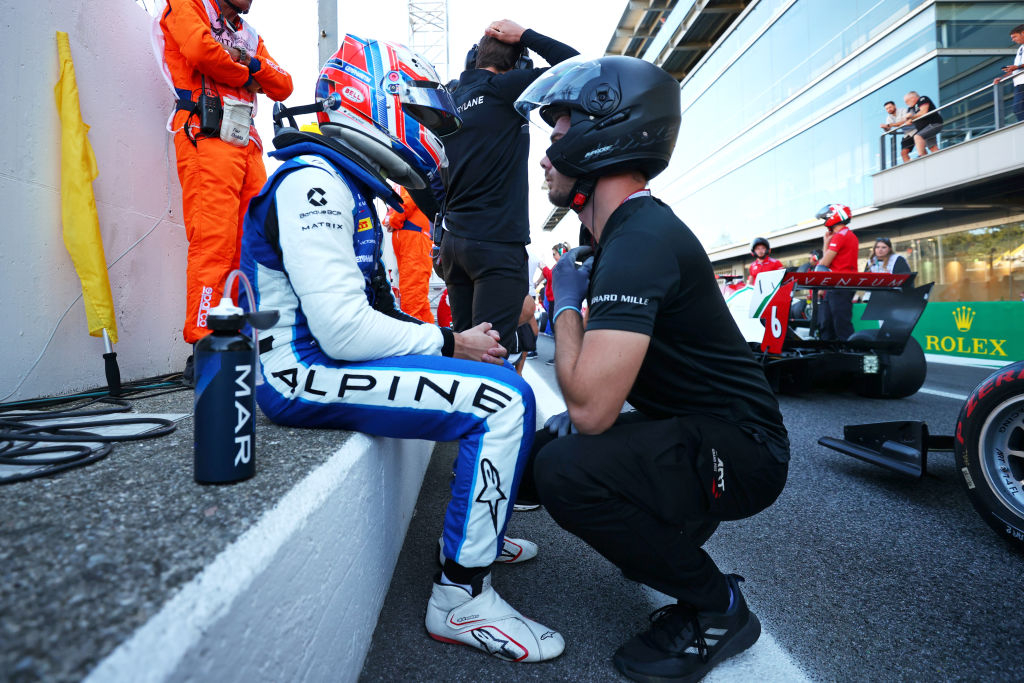 The FIA Formula 3 Championship was decided at Monza when the season-ending feature race was red flagged, but it was not immediately clear what the title outcome was.

On lap 16 of a scheduled 22, the safety car came out after two drivers crashed. A safety car finish would guarantee third-placed Victor Martins the title, but a lap later the race was red-flagged.

Once the field went to the pits and waited for a restart signal, a notice then arrived from the stewards that Martins was penalised five seconds for exceeding track limits.

It still was not enough to deny him the title, provisionally, but confusion reigned as other drivers were penalised without the accompanying notices and it was declared the race would not restart as the order on the timing screen still changed.

Eventually, after six drivers had been penalised, the chequered flag was shown on the results and Martins was crowned champion in fourth place. It was a stressful experience for the ART Grand Prix driver.

“When I saw the safety car, I already thought about it like ‘please, no safety cars during that race, it’s all done’,” he explained.

“I knew the job was done to stay third, even if I was not winning, it was fine. I have been through that many years in the past where I always wanted to win, and I lost the championship because of that. So I just wanted to keep P3, and then there was the red flag.

“In that moment I was trying to stay focused, not trying to think about anything, how I will need to approach the restart. I was trying to switch off, to not think about what was around me, who was behind me, also what position I needed to be. I was on a mood that I was going to look ahead, going to make some moves. Because when you make some moves you kind of defend yourself from behind.”

Then the penalty notice came through.

“No one told me, I saw it from the mechanics, my brother, they were starting to look on the phone and see the 5s penalty.

“First I got really upset and angry about my team. I’m honest, in this moment, you kind of react badly and instantly, instinctively. So I was a bit angry of why I didn’t know before that I had some track limits because I think they told me, but that was also an issue on the FIA who took a lot of time to make it show on the TV that I got some track limits.

“The last one I probably did was already too late when the team told me. So yeah, it was was just a horrible moment. I was like, ‘no, it cannot happen’. And if it was restarting, the first thought I had was last year between [Max] Verstappen and Lewis [Hamilton]. I was like ‘I don’t do the same as Lewis, I keep the championship whatever happens, I want to win that one’.”