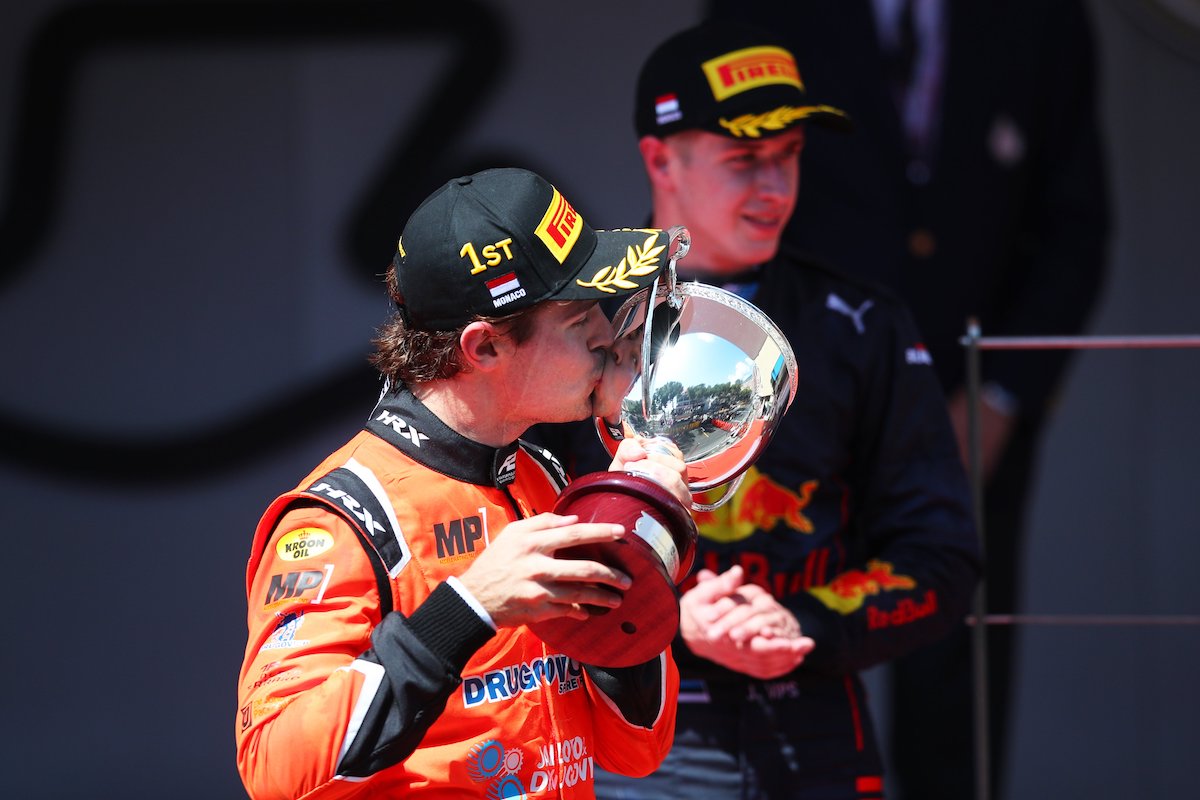 Pourchaire heaped the pressure on Drugovich in the second half of the race, but the championship leader kept his cool to take his third victory from four races. Juri Vips took third.

Drugovich got a good start from pole and had a faultless first half of the race, keeping second placed Pourchaire at arm’s length.

A third of the way through the race, Amaury Cordeel came to a stop on track on the start finish straight. All those running the traditional strategy of starting on soft tyres, including Drugovich and Pourchaire, dived into the pits for supersofts. It was a slow stop for Drugovich, but he still managed to get out ahead of Pourchaire.

All those trying to exit the pits were then held at the exit as marshals pushed Cordeels car into the pit lane, but Drugovich remained in the lead.

Racing resumed for a handful of laps and Pourchaire kept the pressure on Drugovich before running was disrupted with another safety car.

Liam Lawson, who had stalled on the formation lap and started from the pits, had been making good progress up through the order when he tried to make a move on Clement Novalak. The pair made contact at the hairpin and Novalak was fed into the wall and needed to be recovered.

Lawson was able to continue and was running just outside the top 12. His race would later go from bad to worse when he suddenly lost pace and was forced to crawl around the track to the pits and retire.

Pourchaire again stuck with Drugovich on the restart but there was no room for a move around the tight Monaco circuit. Drugovich didn’t put a wheel wrong and began to extend his lead in the closing stages of the race. A small mistake going onto the final lap almost caused Drugovich to lose the victory, but he held on to finish 0.8 seconds ahead of Pourchaire.

It was a relatively lonely race for Vips in third. He spent the first half of the race trying to find a way past Jack Doohan. Doohan defended well but lost the position in the pits and was unable to challenge Vips afterwards.

Doohan finished fourth, holding off Enzo Fittipaldi for the position.

Marcus Armstrong took sixth ahead of Dennis Hauger, the first of the drivers running the alternate strategy.

Hauger had used the extra grip from the supersofts to go from ninth to fifth at the start. He pitted a few laps before the first safety car and was making good progress back up through the order, but the free pit stops for those on the traditional strategy meant the gamble wouldn’t pay off and he finished seventh, just two places ahead of where he started.

Jehan Daruvala passed Calan Williams for eighth late in the race, with Logan Sargeant following him through. Ayumu Iwasa tried to make the same move at the hairpin on the final lap, only to make contact with Williams and take them both out of the race. Marino Sato was promoted to the final points paying position.