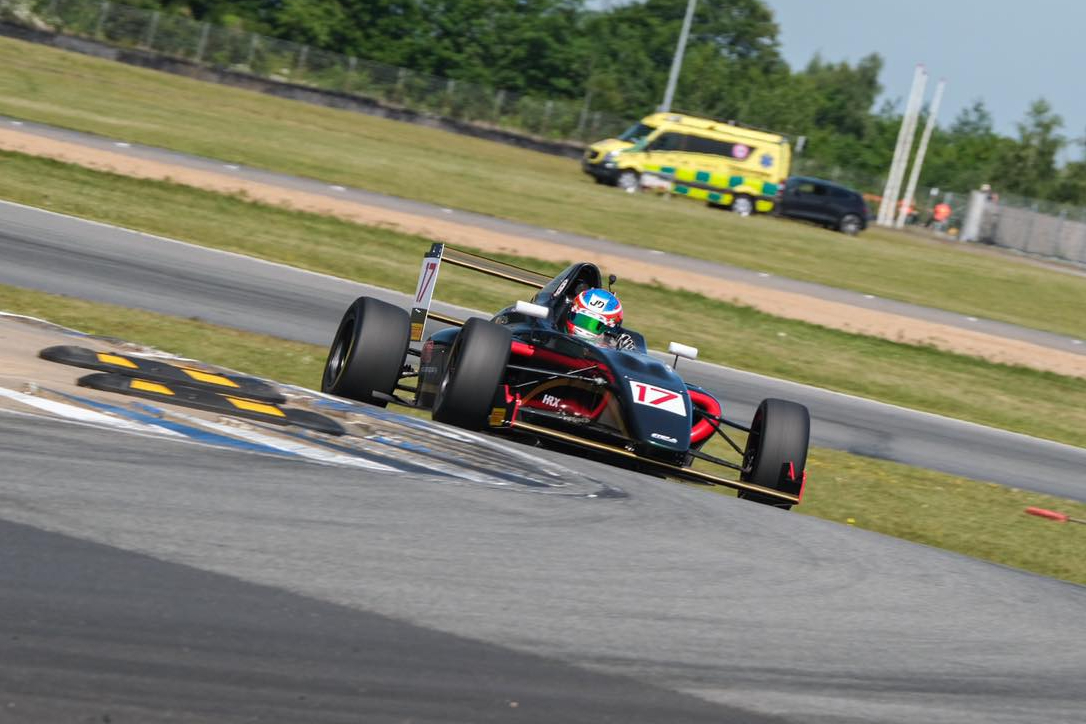 Julius Dinesen now sits 35 points clear in the Danish Formula 4 title race after he won the third race at Jyllandsringen.

The accumulated points of the first two races of the weekend set the grid for the third, putting Mika Abrahams on pole ahead of Dinesen, Sebastian Gravlund and Victor Nielsen.

Abrahams led the way into turn one but then almost spun through turn two, due to a hit from Dinesen he later apologised for, and there was a lot of avoiding action from the drivers behind.

Dinesen and Gravlund had the easiest job in avoiding him and promptly moved into the top two positions, and Gravlund pressured Dinesen for the lead later around the lap.

He couldn’t find a way past, and that proved to be his best opportunity of the race as Dinesen grew his lead to 1.575 seconds over the 14 laps of the race.

Also able to slip past Abrahams on lap one was the self-run Magnus Pedersen, and he was quickly gapped by the top two. On lap four, Formula 5 runner Mads Hoe passed Abrahams started to close in on Pedersen. Once he got onto his gearbox he could not find a way through, but he pressure on the F4 driver at every corner and although Pedersen held on to fourth place, he does drop to third in the standings behind Gravlund.

Abrahams finished a very distant fifth, and came under late pressure from Victor Nielsen who had started in fourth but dropped all the way down the order with a lap one off and had to fight his way back through to finish just on Abraham’s tail in sixth.

One of the drivers he passed on the way was Frederik Stena, who spent most of the race in defence but lost multiple places and finished way back in ninth – albeit with a heavily repaired floor – and behind the debuting Aurelia Nobels and Theodor Jensen.