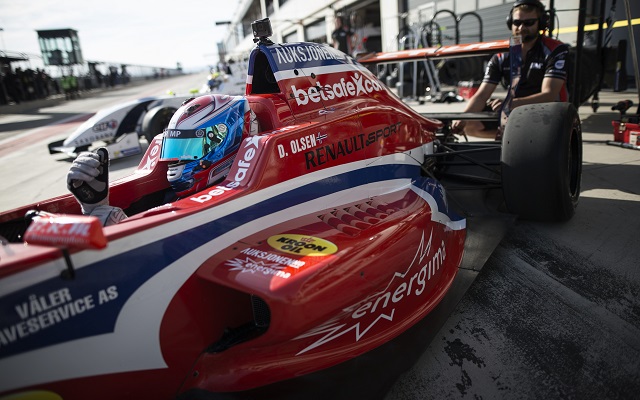 Dennis Olsen mastered changing weather conditions to take pole position for the third and final Eurocup Formula Renault 2.0 race of the opening round at Aragon.

2014 runner-up Olsen topped the times in the first of the two groups to run, making the most of the peak track conditions towards the end of the segment before the rain fell harder for the second group.

NEC champion Ben Barnicoat topped that second group by 1.4 seconds, but he was more than eight seconds slower than Olsen and will start second on the grid.

Jack Aitken bounced back from a disappointing Saturday to secure P3 on the grid, four tenths off the group pace set by Olsen.

French F4 champion Lasse Sorensen was the nearest man to Barnicoat and will start fourth.

Row three will be shared by Ignazio D’Agosto and Martin Kodric ahead of Ukyo Sasahara and Callan O’Keeffe. Anthoine Hubert and Darius Oskoui will complete the top ten on the grid.

Louis Deletraz, winner of both Saturday races, could only manage eighth place in the first group, putting him 15th on the grid. The same can be said for his Josef Kaufmann Racing team-mate Kevin Jorg who finished second in race two – he was eighth in the second group and will start 16th as a result.