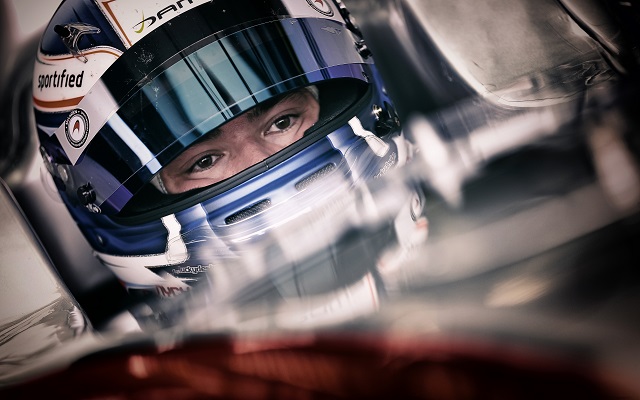 Nyck de Vries has claimed a pole position on his debut weekend in the Formula Renault 3.5 Series, topping Sunday qualifying at Aragon with a last-gasp effort.

The Eurocup Formula Renault 2.0 champion and McLaren protege knocked Oliver Rowland off the top of the times as he took the chequered flag, and then held on as others improved behind him.

One of those to better their time at the end was Matthieu Vaxiviere, who came up just short of repeating his pole from race one, 0.024s slower than de Vries.

Rowland was relegated to third at the end, but stayed ahead of Fortec team-mate Jazeman Jaafar – who finished second to the Briton in race one – by just one thousandth of a second.

Pietro Fantin claimed fifth, but was under investigation at the end of the session. Tom Dillmann was sixth ahead of Dean Stoneman.

Nicholas Latifi finished up eighth, having gone top with about five minutes remaining. Tio Ellinas was ninth, and completing the top 10 was Alfonso Celis, who held top spot when the field pitted in the middle of the session and did improve his time later on.

Formula 1 driver Roberto Merhi finished up 18th of the 20 drivers, although the top 16 were covered by just over nine tenths of a second.