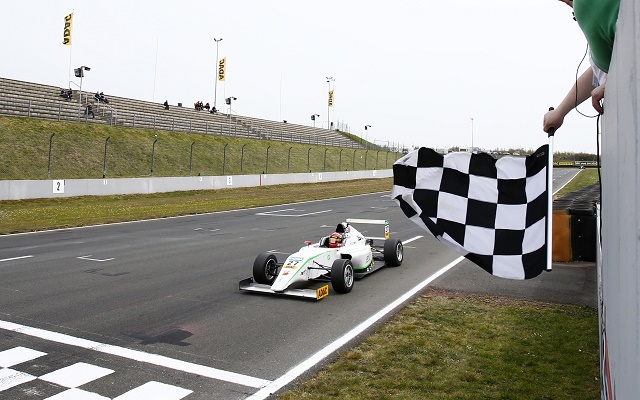 Marvin Dienst remained the only driver to win an ADAC F4 race as he took his second victory of the Oschersleben weekend from pole position.

Esmeijer, who was on pole for race one but did not finish it, stayed within a second of Dienst for all thirty minutes of the race and kept the German under pressure.

But he never forced the issue, content with helping his two-car team to a perfect run.

Behind the duo, Ralf Aron passed Joseph Mawson off the line for third and maintained position, claiming his fourth podium in just as many starts with Prema.

After the start, the 35-car pack was through the first few corners with no incident, but Nikolaj Rogivue then suffered a heavy crash, bringing out the safety car.

Neuhauser’s Tim Zimmermann made up seven places over the opening lap and continued to march through the field after the restart. He first forced teammate Kim-Luis Schramm wide into turn one to claim ninth and then eased past Joel Eriksson and Giorgio Maggi.

A spin for Robin Brezina brought out the weekend’s fifth safety-car period, leaving a five-minute green flag dash at the end of the race.

There were no changes in the top five, with Mawson and Mattia Drudi finishing right outside of the podium, but sixth-placed Ferrari junior Guanyu Zhou slipped behind both Zimmermann and Maggi.

Eriksson took ninth, while Schramm was forced into an error by Robert Schwartzman, who claimed tenth.

Jonathan Cecotto, Harri Newey and Mick Schumacher – all sons of big motorsport names – were just outside of the points.