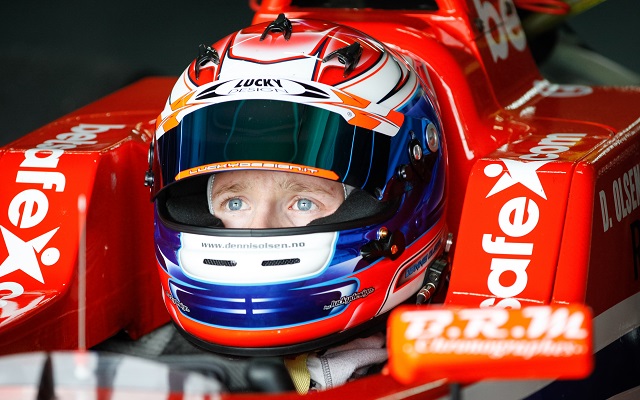 Dennis Olsen ended the opening weekend of the Eurocup Formula Renault 2.0 season at Aragon with victory in race three, but only after he escaped being taken out in a big crash?behind him during an elongated safety car period.

Olsen led the wet race from pole but was pursued hard in the opening laps by Jack Aitken, who made a strong start from third.

Ignazio D’Agosto made a good start to get up to third but was re-passed later in the opening lap by Lasse Sorensen, only for the French F4 champion to run deep at Turn 15. That allowed D’Agosto to reclaim the place down the long back straight.

Ben Barnicoat, having slipped from second to fifth at the off the line, also had a look at passing Sorensen at the hairpin but there was contact between the two, putting Barnicoat out of the race with heavy damage and forcing Sorensen to retire to the pits.

The safety car was called as the leaders headed onto lap four, after both Strakka cars of Valentin Hasse-Clot and Charlie Eastwood had come to a halt.

Ukyo Sasahara, up to fourth because of Sorensen and Barnicoat’s tangle, was eliminated from the race under the safety car with damage to his rear-left suspension at Turn 8.

The recovery of his car prolonged the caution period, but just as the race was about to be restarted, there was another crash involving frontrunners.

Olsen slowed the pack down at the end of the back straight to allow the safety car to head up the road, but?Martin Kodric – promoted to fourth by Sasahara’s demise – came through the spray at speed and careered into the back of both D’Agosto and Aitken, eliminating all three from the race. A long list of drivers are under investigation post-race.

The safety car therefore remained on track until the chequered flag, with Olsen (having narrowly avoided being collected by the out-of-control Kodric) the winner ahead of Anthoine Hubert and Darius Oskoui.

Callan O’Keeffe was fourth ahead of James Allen. Simon Gachet had been sixth but dropped back to 19th on the final lap, promoting races one and two winner Louis Deletraz. The Swiss driver started 15th but got up to 11th before the safety car, and had moved up to sixth by the flag, followed by his team-mate Kevin Jorg.

UPDATE: Barnicoat will drop four spots on the grid for the next race of the season, while Kodric will be demoted to the back.