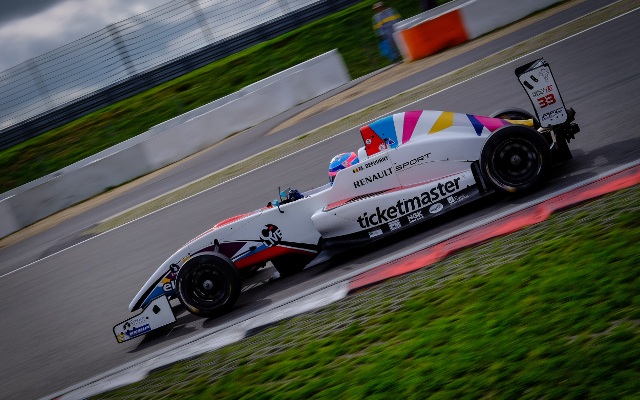 Formula Renault 2.0 rookie Max Defourny picked up his second win of the NEC season in race two at the Nurburgring after Ukyo Sasahara and Louis Deletraz went off together ahead of him.

Race one winner Sasahara had taken the lead with a better getaway than pole-sitter Deletraz.

His early lead was wiped out by a safety car period after Henrique Chaves spun off into the inside tyre barrier exiting Turn 4 on lap four.

Championship leader Deletraz got a run at his closest title rival Sasahara at the restart, and the pair ran side-by-side into Turn 1.

But as the two drivers tried to outbrake each other, Sasahara bounced off the inside kerb and with Deletraz unable to turn in, they both headed straight on and through the gravel trap.

That promoted Sasahara’s ART Junior team-mate Defourny into the lead, the Belgian having only just passed Jehan Daruvala for third when Chaves crashed.

He was able to open up an advantage of nearly three seconds over Daruvala in the remaining 10 minutes.

Kevin Jorg benefited from the incident involving his title rivals to finish third ahead of Stefan Riener.

Dan Ticktum held off Alex Gill to take fifth, with Dries Vanthoor also close behind in seventh place from the back of the grid.

Sasahara and Deletraz had dropped down to 11th and 13th respectively but with the Japanese driver struggling to find a way past Josef Zaruba, Deletraz made the better initial progress.

He swept around the outside of Sasahara at Turn 11 and then got ahead of Zaruba in similar fashion three corners later at the chicane to move into 10th, with Sasahara following him through.

Sasahara recovered though, passing Deletraz and Bartek Mirecki in the final couple of corners on the penultimate lap and then taking Colin Noble on the last to finish eighth. Deletraz was 10th, just missing out on beating Noble to the line.

As in race one, Darius Oskoui was in the wars in the early stages, having a clash with Nikita Mazepin at the chicane that sent the Russian into a spin (finishing 13th) and forced Oskoui to retire to the pits.