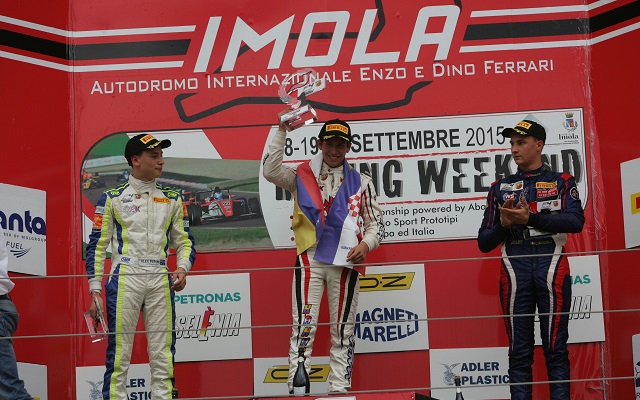 The Colombian’s start to the race from pole was not ideal?as he was demoted by Giuliano Raucci, however, the Brazilian’s car slowed down during the opening lap which gave Kanayet the lead back ahead of Alex Peroni, Ye Yifei and Diego Bertonelli.

The safety car was soon out when?Joao Vieira spun into the wall after contact with Lando Norris on the main straight at high speed to suffer his second retirement of the weekend.

It was a lengthy stint behind the safety car with the green flag only back for the final lap, when Kanayet managed to fend off the charging Peroni, the Australian claiming his maiden podium as well.

Yifei on the other hand did not benefit from the restart as he dropped down to sixth, giving Bertonelli the task to keep David Beckmann at bay for the final podium spot.

The German was all over him but Bertonelli managed to narrowly?stay ahead by just 0.01s.

Ralf Aron, winner of race one, passed Guan Yu Zhou and Ye on the restart to take fifth, with his Ferrari junior teammate Zhou having to settle for seventh.

Robert Shwartzman took eighth and the final positions in the top ten went to Moritz Muller-Crepon and Marcos Siebert.

F4 star Norris stalled from sixth?on the grid and retired in the pits after the contact with Vieira.