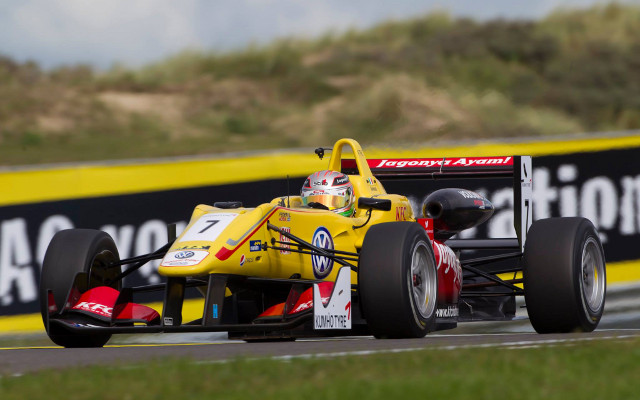 Antonio Giovinazzi became the 2015 Masters of Formula 3 champion after confidently taking a lights-to-flag victory at Zandvoort.

The Italian led the field off the line ahead of George Russell, who overtook Sergio Sette Camara and the stalling Markus Pommer for second position.

Giovinazzi built a safe lead after a couple of storming laps at the beginning and kept increasing it to see the checkered flag with a gap of 8.4 seconds.

Russell completed a Carlin 1-2, the British team celebrating their first Masters of F3 title since Takuma Sato’s triumph in 2001.

They were followed by three Motopark drivers in the order of Sette Camara, Sam MacLeod and Nabil Jeffri, while Arjun Maini secured sixth.

Ryan Tveter had to face early pressure from Callum Ilott but managed to keep the Red Bull junior at bay to grab seventh as Alessio Lorandi ended up eighth.

Threebond duo Julio Moreno and Dennis Olsen both passed Felix Serralles, who started to struggle for pace in the late stages, to grab 10th and 11th respectively.

Following his poor start, Pommer recovered from 16th to 12th only to pit and finish the race a lap down.