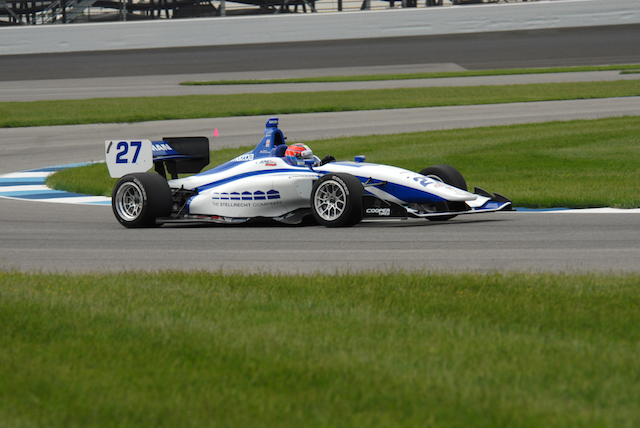 Dean Stoneman?claimed his first victory in the United States in an eventful second Indy Lights race of the weekend on the Indianapolis road course.

The Andretti Autosport driver went from fifth to first in a chaotic opening lap.?Ed Jones was challenged for the lead into Turn 1 by Carlin team-mate?Felix Serralles, and as both ran deep they banged wheels and Serralles went straight on through the grass as Jones retained the lead.

Felix Rosenqvist then looked at?Jones into the chicane on the back straight, but having been?baulked he was passed by the quicker?Stoneman into Turn 7, then spun around by contact from behind by Belardi team-mate Zach Veach.

Stoneman was almost immediately gifted the lead, with Jones locking up and going straight on Turn 7 and dropping to seventh.

Serralles went?on a charge and took second place around the outside of?Santiago Urrutia?and set off after Stoneman, but would make a second grass-cutting trip before the end, this time into the complex at the end of the lap.

This didn’t allow Stoneman to breath easy though, as he instantly came under pressure from Urrutia, but the Briton held on to become the sixth different winner from seven races so far this season.

Urrutia finished eight tenths of a second behind, with a similar gap back to?Kyle Kaiser?in third.

Championship leader Jones recovered to fourth, with Serralles rejoining from his second off-road moment just behind him.

Rosenqvist made it home in sixth, finishing just 4.5s behind Stoneman without?assistance from a caution.

Zach?Claman DeMelo took himself,?Scott Anderson and?Scott Hargrove?off into the gravel in one move as the trio fought over seventh. While the Canadian youngster was forced to retire, Anderson and Hargrove completed the lead-lap finishers behind?Shelby Blackstock.

Schmidt Peterson Motorsports lost two of its drivers before the race even began, with first?RC Enerson spinning and then?Andre Negrao crashing on the front straight as he weaved to warm his tyres.