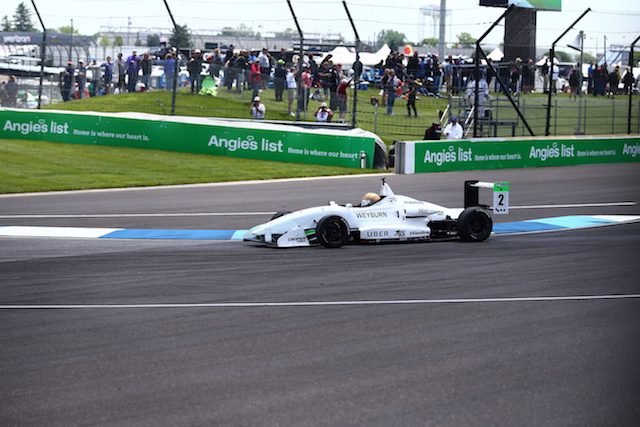 Parker Thompson picked up his third win of the USF2000 season in an interrupted?second race of the weekend on the Indianapolis Motor Speedway.

Thompson led from pole position, as some first-lap incidents triggered an early caution. That interruption lasted around 20 minutes as oil was cleared from the track.

The race eventually restarted with less than eight minutes left with Thompson leading until the chequered flag ahead of?Victor Franzoni.

Third place changed hands, with?Jordan Lloyd being pushed down to fifth as?Luke Gabin came through to finish third from seventh on the grid, in front of?Anthony Martin.

Yufeng Luo was sixth in front of?Garth Rickards.?Lucas Kohl?finished eighth from 13th on the grid with?TJ Fischer rising from 17th to ninth and?Robert Megennis?taking 10th from 15th on the grid.