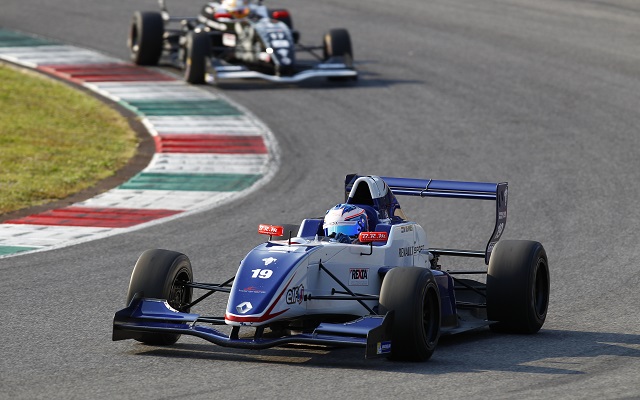 Koiranen GP’s Nyck de Vries took another victory in Formula Renault 2.0 Alps in the second race of the penultimate round of the season at Mugello.

De Vries, who sealed the 2014 drivers’ title yesterday, triumphed in a straightforward race that was suddenly red-flagged in the final minutes due to sudden heavy rain.

The Dutchman comfortably led the field off pole position and methodically increased his lead lap after lap, eventually pulling out more than four seconds on nearest rival Charles Leclerc.

The Monegasque driver was busy staying ahead of Matevos Isaakyan and Bruno Bonifacio, who were the first two drivers to go off into the gravel when the rain hit the track on lap 14.

With more cars following suit, the race was immediately red-flagged and there was no intention of resuming. The officials rolled the results back to lap 12.

As such, de Vries ended up with his eighth win of the campaign, while 2.0 rookies Leclerc and Isaakyan rounded out the podium.