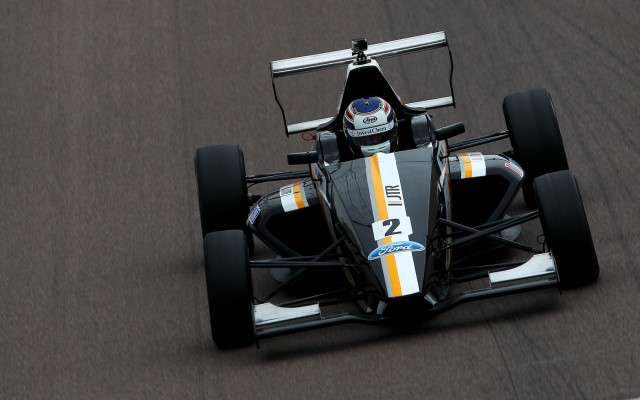 Jayde Kruger ended the Formula Ford weekend at Rockingham on a high with a second win in race three.

The South African had drawn level on points with title rival Harrison Scott with victory in race one, only to lose 24 points with a retirement in race two.

Starting on pole position for race three, Kruger made a good start and third-place starter Max Marshall moved up to second place past Scott, who was promoted up onto the front row when Ashley Sutton withdrew after overheating his engine in race two.

Kruger’s lead was up to 1.6 seconds with eight minutes remaining, but then quickly fell back to his JTR team-mate Marshall, with only half a second between them with four minutes left on the clock.

Kruger managed to recover his speed though and regain his original advantage before the finish. After the race, he said he was delayed by a repeat of a fuel pump problem that had forced him out in race two.

Scott finished a quiet third, and will take a 17-point lead into the penultimate round at Silverstone. Louise Richardson scored her best result yet of fourth after passing Ricky Collard at turn three on the opening lap.

Collard remained on Richardson’s tail for much of the race before pitting and jumping out due to an apparent cockpit fire. Michael O’Brien was fifth, while Clay Mitchell ended his debut weekend with sixth after passing Juan Rosso. James Abbott, Chris Mealin and Greg Holloway completed the ten finishers.