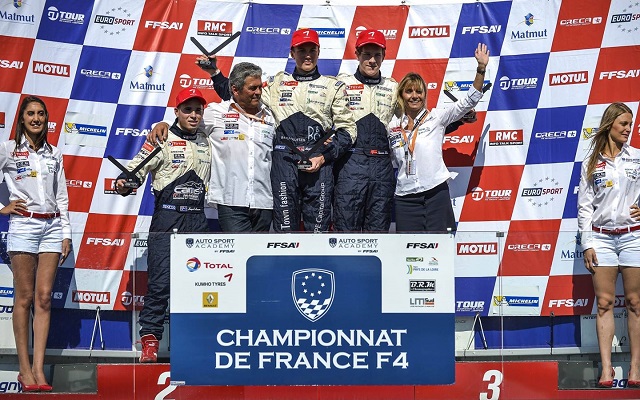 Having won his first race in single-seaters yesterday, Felix Hirsiger added a second victory to his tally in the third race of the French F4 Magny-Cours round as he held off a charging Joseph Mawson.

Hirsiger, starting on pole for the second time this weekend, made a solid getaway from the line and managed to keep front row starter Lasse Sorensen behind into turn one. Sorensen was then challenged by Mawson, which allowed the Anglo-Swiss race leader to pull out a solid gap over the opening lap.

Shortly thereafter, Mawson was through on Sorensen, settling into second. Both he and the Dane then began to close in on the leader, slowly evaporating the advantage that he’s built up.

After seven of the 14 laps, the three frontrunners bunched up as close as ever, while also being reeled in by fourth-placed Valentin Hasse-Clot. It was then that Sorensen tried to get the spot back from Mawson, pulling alongside after a sideways moment for the Aussie but eventually yielding as Mawson took the inside line.

The brief fight between his two main chasers gave Hirsiger some breathing room, but Mawson was back up to speed right away and started to cut down on the leader’s advantage. The Australian ended up right on Hirsiger’s tail on the final lap and the two nearly were almost side-by-side into the final chicane.

Whilst Mawson yielded and took the corner slowly, Hirsiger had little choice but to skip through the chicane, which he did, taking the checkered flag right afterwards.