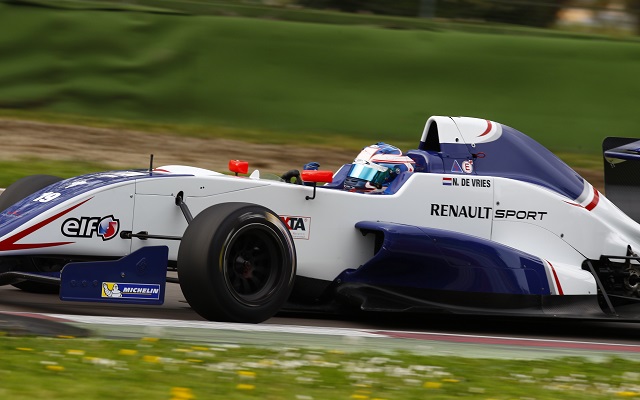 Formula Renault 2.0 Alps championship leader Nyck de Vries was quickest in the dry opening session of the series’ round at Monza, whilst Ben Barnicoat topped the rained out second practice.

The Dutchman was four tenths clear of nearest rival Jack Aitken in the morning with Aitken’s Fortec teammate Charles Leclerc closely following the Brit in third.

A much wetter afternoon session saw Barnicoat narrowly hold on to first, whilst Leclerc and de Vries were just two tenths down in second and third respectively. Akash Nandy was more than a second down in fourth, with Aitken securing another top-five result.

Yuan Bo secured sixth, ending up two seconds down on Barnicoat and just 0.001s ahead of Rovera. Luke Chudleigh, Hong Li Ye and Pietro Fittipaldi made up the rest of the top ten.