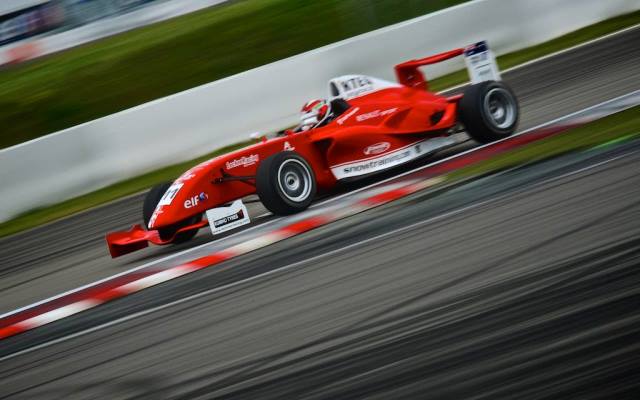 Anton De Pasquale scored his third win of the Formula Renault 1.6 NEC season in race one at the Nurburgring after rival Janneau Esmeijer was penalised for a jump start.

Esmeijer’s good launch put him into the lead ahead of pole-sitter De Pasquale, with the Dutchman looking for his third straight win after his double at Spa-Francorchamps.

The leading pair traded fastest sectors in the opening laps, and there was still only around half a second between them when Esmeijer pitted to serve his drive-through penalty at the end of lap six.

From there, De Pasquale maintained his advantage over the rest, winning by three seconds.

Second-row starts Larry ten Voorde and Max Defourny were largely inseparable throughout the race, but ten Voorde managed to remain ahead and claim second by 0.8s.

With a number of other drivers also receiving penalties, Esmeijer was able to recover to fourth, passing Simon Mirguet and then Ferdinand Habsburg in the closing laps.

Ralf Aron was able to capitalise on others’ problems to climb from 13th and last on lap one up into seventh ahead of Oliver Soderstrom. The penalised Boris Kolff and Florian Janits completed the top ten.