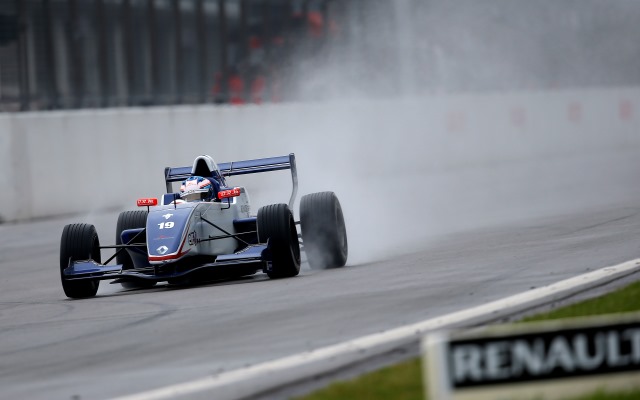 McLaren young driver Nyck de Vries stretched his lead at the top of the Eurocup Formula Renault 2.0 standings to 40 points with a dominant win from second on the grid in a wet first race at the Nurburgring.

The Dutchman made the better start and was able to get himself ahead of pole-sitter Alexander Albon before pulling away from the KTR man who had little response.

Albon was able to come home second ahead of Jack Aitken, the rookie who secured his first podium in this series.

The battle for fourth place was intriguing as Dennis Olsen came through from 12th place on the grid to claim it. The rookie drove an excellent race, with the Norwegian’s final move being a late pass on Charles Leclerc, who had to settle for fifth.

Ignazio D?Agosto crossed the line in sixth place after getting past Andrea Pizzitola, who gradually slipped back during the race having started on the second row.

He didn’t drop as drastically as Nick Cassidy though, who could not take advantage of his third place qualification. The New Zealander ended up eighth, as Victor Franzoni (who started in 23rd) and Kevin Jorg rounded off the top ten.

There were no points for Matt Parry and Levin Amweg after the pair sacrificed their top ten positions in a collision.