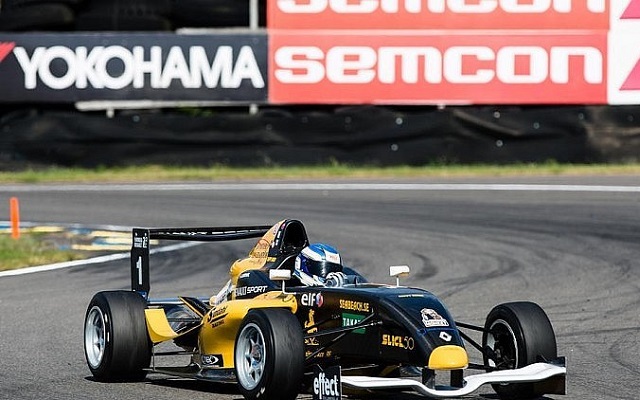 Swede Lukas Sundahl improved his chances in the Formula Renault 1.6 Nordic title fight by winning both Saturday races of the four-race round at Falkenberg.

Sundahl started the first race from pole after topping qualifying and maintained the lead for every lap of the race distance, crossing the line in first to take the checkered flag after 22 laps.

Championship leader Joonas Lappalainen started in third, but went off on the opening lap, triggering an early safety car.

Norwegian Kevin Aabol was the big mover during the early stages of the race, driving past Ilmari Korpivaara and Pontus Fredricsson on lap two before taking second place from Robert Svensson during the restart.

However, Aabol did not go on to challenge Sundahl, instead having to fend off Svensson for the remainder of the race. The top three stayed in that position until the race was concluded under the safety car.

Korpivaara ended up taking fourth while Fredricsson rounded out the top five. With the race’s fastest laps deciding the grid for race two, it was Sundahl who who got to start from pole again alongside Svensson.

In the race itself, Sundahl kept the lead at the start and held on durng a subsequent safety car restart to then cruise towards his second win.

Fredricsson overtook Svensson early on to claim second, while Aabol moved into third after the restart.

Svensson and Rasmus Ericsson made up the rest of the top five, with championship leader Lappalainen fighting his way up to sixth from the back of the grid.

In the standings, Lappalainen now leads Sundahl by only five points with 119 points to the Swede’s 114. Aabol is third with 86, while Fredricsson sits in fourth with 80.