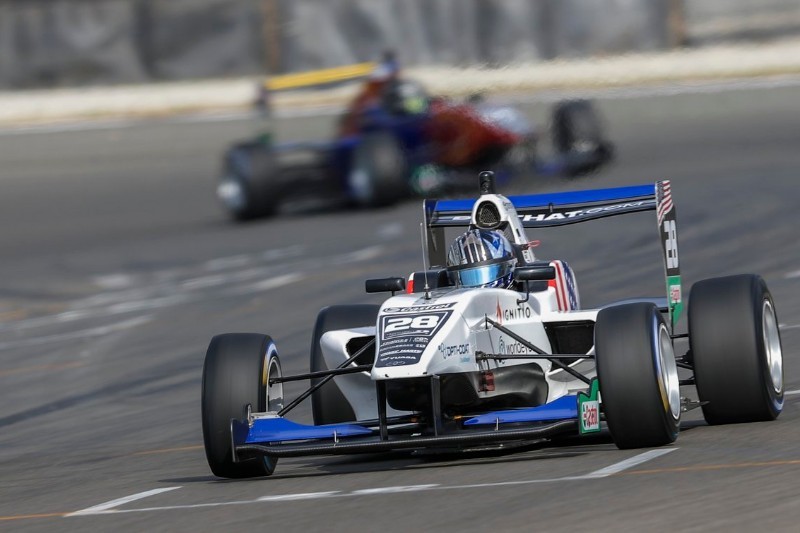 Lawon and title rival Marcus Armstrong started the reversed grid race in seventh and eighth, and Armstrong was briefly able to get alongside Lawson on the opening lap but wasn?t able to mount a serious challenge until after a mid-race safety car and red flag period.

Lawson was trying to find a way past Brendon Leitch, putting him off line and allowing Armstrong to move into fifth. The positions swapped back just a few corners later, though, when Armstrong also tried to challenge Leitch, giving Lawson the room he needed to retake the position.

Armstrong stayed on his title rival?s tail for the remainder of the race, but didn?t get another opportunity to challenge and had to settle for sixth. He now lies three points behind Lawson heading into the final race of the season.

At the front of the field, Das made a strong start to pass poleman Petru Florescu off the line. The American built a gap back to the rest of the field as Esteban Muth and Lucas Auer battled for the remaining podium places.

He took the chequered flag 1.8 seconds ahead of Auer, who snatched second from Muth on the restart after the red flags were brought out when Florescu ran into the tyres at high speed at the final corner.

Leitch resisted pressure from both championship contenders to take fourth, a potentially influential drive in the outcome of the title, while Raoul Hyman led?Calan Williams, Thomas Smth and Brendon Locke hope to complete the top 10.