Home Featured Comment: F3 teens end 2015 on a high at toughest track of all
FeaturesFormula 3 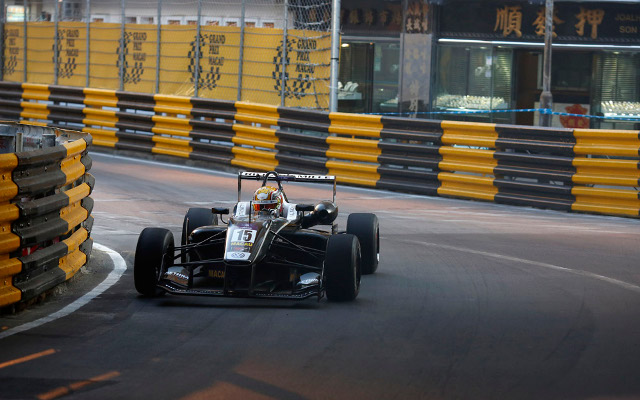 It’s been an eventful year in F3 but numerous young rookies shone on their first visits to Macau and end 2015 on a positive note, says Peter Allen.

It?s hard not to think that Formula 3?s had a couple of negative main themes in 2015, in contrast to last year when it bathed in the spotlight shone on Esteban Ocon and Max Verstappen.

Firstly, the hordes of teenagers trying to follow in their footsteps often found the going tough, were publicly castigated for the high number of crashes and too many had more trips to the stewards than the podium.

Secondly, any hope for another rookie champion faded when veteran Felix Rosenqvist swept the board.

He did the same in Macau on Sunday, but without wanting to take too much away from a deserving and clearly talented winner who still had to work for it, there were others also warranting attention.

The most spectacular of those was Charles Leclerc.

The championship leader after the Norisring event in June, the 18-year-old from Monaco then went through a prolonged barren spell without a single podium as he gradually fell from contention.

After that surely confidence-sapping run, expectations were modest for his debut on the world?s other famous racing city-state. Yet, after a low-key Thursday, Leclerc was among the very frontrunners from Friday onwards in his most competitive showing for five months.

He qualified third and ran there for most of the qualification race, ending it right on the tail of Rosenqvist who was then promoted to the win and Sunday pole when Antonio Giovinazzi was controversially demoted.

At the start of the big race, Leclerc immediately hooked onto the rear of Rosenqvist?s Prema-run Dallara through the first corner and down the long run to the heavy braking zone at Lisboa.

When he got there, Leclerc demonstrated he was back to full confidence with an audacious move around the outside to take the lead. He traded places with Rosenqvist twice more within the next lap ? getting back ahead prior to turning in for Lisboa on the second occasion ? before a red flag forced him to lead the field back to the pits. 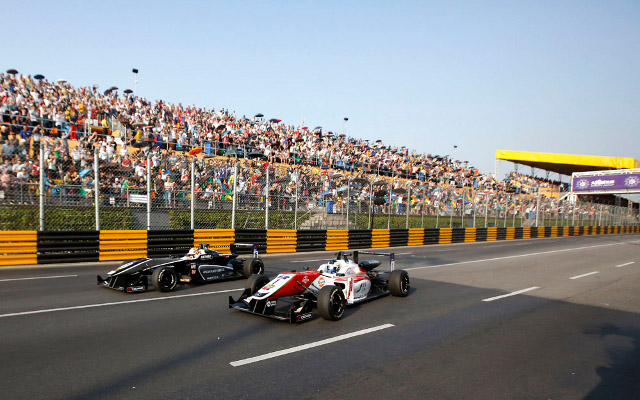 At the restart, Leclerc was passed not only by Rosenqvist but also by Sam MacLeod, who for all his surprise pace in Macau was unlikely to stop the leader from escaping.

It took Leclerc a few laps to repass MacLeod and a fastest lap in the process still left him with over two seconds to find. Rosenqvist had a response to each of his attempts before backing off in the last couple of laps, leaving barely a second between them at the flag.

The pure racer in Leclerc was disappointed in the immediate aftermath of a race he could have won, but he can look back proud at his weekend?s performance. Rookies rarely win in Macau and he got as close as anyone, up against particularly experienced and accomplished competition.

And the style in which he fought for the win was a firm reminder of his abilities after a challenging second half to the year on and off track. He?s an absolute star, there?s no doubt about it.

Leclerc stole the show among the teenagers, but a scroll down the final results showed plenty of other success stories.

Four 17-year-olds made it home in the bottom half of the top 10. They were headed by Santino Ferrucci, following up his eighth place from 2014 with a sixth this time after another clean run, ending something of a mixed year on a high.

Alessio Lorandi had an outstanding weekend ? in which his only setback was illness ? to take seventh, ending his maiden season out of karts on a particularly positive note after a tough incident-filled run-in.

He impressively came out on top of a race-long scrap with Lance Stroll. The Canadian?s pace was perhaps a little disappointing, but in the context of his season it was commendable to concentrate on making the finish and some damage sustained in both races didn?t help. It?ll be next year when he bids for victory. 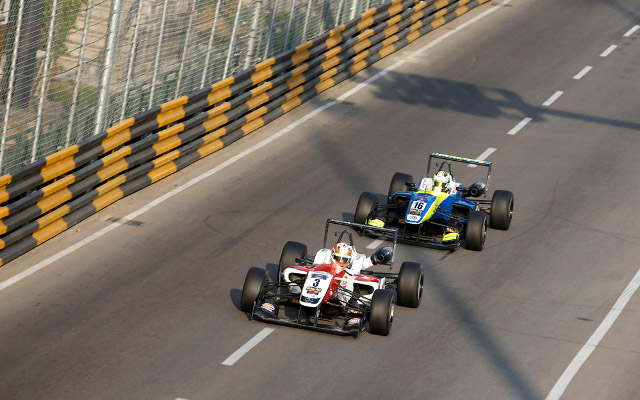 Arjun Maini qualified ahead of both Lorandi and Stroll in eighth and although he slipped back to 10th over the two races ? despite a few drop-outs ahead ? it was still a promising showing from the Indian, who left Leclerc and Lorandi at Van Amersfoort and moved over to T-Sport for Macau.

One place outside the top 10 was another 17-year-old, Dorian Boccolacci, who showed no ill-effects of a Friday crash to come from the penultimate row of the qualification race grid, showing his quality after an unduly large step up last winter.

Two other 17-year-olds had the speed to finish ahead of the five above. The season’s surprise package Sergio Sette Camara was in front of Ferrucci at the restart but was ambushed by two cars and squeezed between them, picking up a puncture. After pitting, he would finish last but set a new Macau lap record on the very last tour ? it was so late, MacLeod had already been called to the podium to get the fastest lap trophy!

Callum Ilott ? the youngest driver in the field at 13 days Stroll?s junior and only a week past his 17th birthday ? stunned in Thursday qualifying by giving Rosenqvist his biggest challenge, but he wiped himself out of Friday?s decisive session on his first lap.

That put him 18th on the grid and in the firing line for the qualification race pile-up, injuring both hands. He?d made little progress when he went off in the main race. He controlled his style well enough to be classified in all 33 European races, but Macau caught him out.

With the way the European season went, I feared more than just Ilott would get caught out in Macau, which seems to combine the challenges of Monza, Spa, Pau and the Norisring into one.

But as much as experience counts in Macau, talent can help a lot too. Many of the rookies demonstrated their ability by getting to grips with it quickly and running higher up the order than normal, putting them out of harm?s way.

They then raced sensibly too. There was only one notable incident in either race ? and they were triggered not by teenage rookies but by drivers with greater age and experience.

Perhaps larger-than-normal field spread helped to make things calmer, but Macau race starts are usually chaotic and yet the first few corners to the main race were incident-free this time.

What happened earlier in the year should certainly not be glossed over ? it needs to be learnt from both by drivers and officials alike and avoided in the future.

But the large majority of the under-fire youngsters have proven they are up to the job and ended the year on a high at the toughest track of them all. 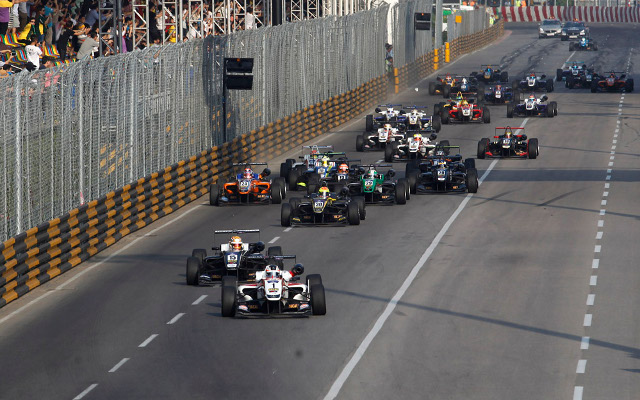