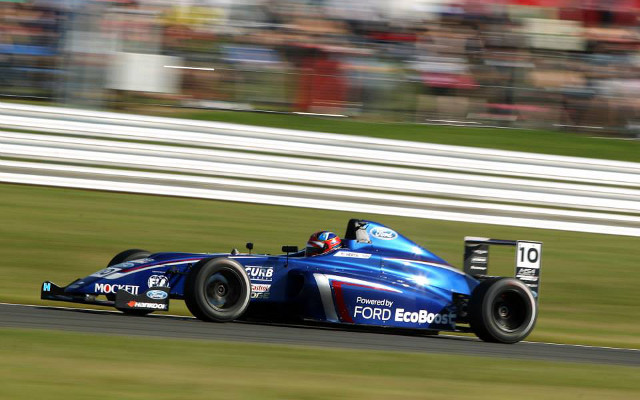 Colton Herta claimed his second MSA Formula win of the day at Snetterton, leading the third and final race of the weekend from pole position to chequered flag.

It was an even start off the line for the leading contenders, but Herta was able to build a 1.4-second margin over the opening lap as his Carlin team-mate Lando Norris fended off Dan Ticktum behind.

The gap between Herta and Norris remained around 1.5 seconds for most of the race, but the American stretched his advantage to 2.4s in the closing stages.

Norris slipped back into the clutches of rival Ticktum late on but was able to hold onto second place at the line.

Sennan Fielding held off Petru Florescu to take fourth place, with the Romanian gaining a spot from sixth on the grid as a result of Matheus Leist being ruled out by his race two engine failure.

With fourth-row starters Sandy Mitchell and Josh Smith forced out with issues, Tarun Reddy climbed from ninth to sixth.

Enaam Ahmed was seventh, while Jack Barlow survived late-race attention from championship leader Ricky Collard, who had to start at the back of the grid after mechanical issues prevented him from setting two quick laps in qualifying.

As Collard carved his way up the order, he twice opened the door for Rafa Martins to help the Brazilian to beat Jessica Hawkins and Dan Baybutt to 10th place.

Just after they’d cleared Hawkins and Baybutt, Collard and Martins were gifted another place each by Toby Sowery dropping out of ninth and joining Fortec team-mate Smith in the pits.

Collard’s standings lead over Norris has been reduced from 26 to 10 points.