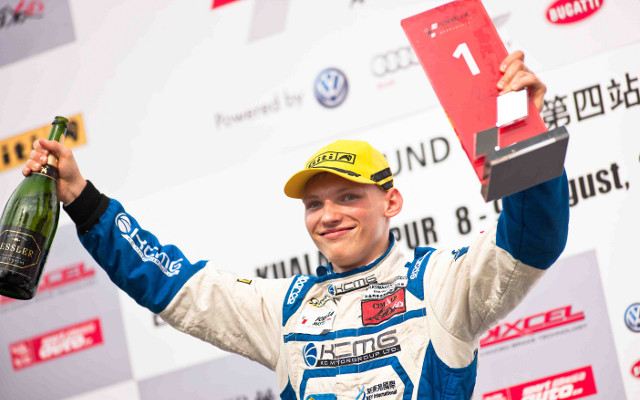 Estonian driver Martin Rump extended his championship lead with two commanding Sunday wins on the Kuala Lumpur street track in the fourth round of the 2015 Formula Masters China Series season.

The KCMG driver enjoyed comfortable lights-to-flag victories in both races, and with it, extended his race-winning streak to six. The battle for second in both races was nowhere near such a formality as that, though.

Race two saw Rump’s closest title-challenger Jake Parsons of Meritus GP beat series newcomer and 2013 ADAC Formel Masters champion Alessio Picariello in an enthralling battle. Having got the jump on Picariello off the line, Parsons proceeded to hold off the Belgian for the entire race, finishing just 0.02 seconds ahead.

Rump was peerless again in race three, but there was action behind him with Picariello being forced to retire early with a broken rear suspension. Olsen slipped into second at the start, but was forced to contend with Kiyohara, Parsons and Rowe for most of the race.

The Super License driver dropped to fifth at the flag, having had to serve a drive through penalty for a jump start. Olsen, Parsons and Rowe finished line astern in second, third and fourth.

Yuan Bo took his first points with KCMG with a solid drive to sixth, ahead of Swanepoel in seventh.

Hudspeth kept the charging Woodroof at bay, the Malaysian having started dead last after a crash in qualifying yesterday. Aidan Read completed a low-key weekend with a tenth-place finish.