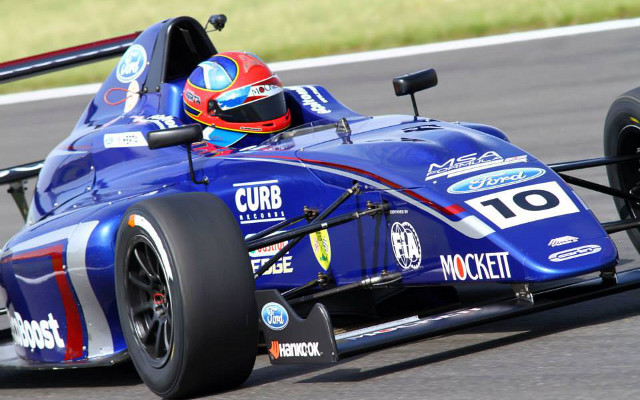 Colton Herta triumphed in the second MSA Formula race of the Snetterton weekend.

The 15-year-old American, the youngest driver in the field, showed potential earlier this weekend by taking double pole in the qualifying, yet a spin in race one left him finishing down in ninth.

That allowed him to start the reverse-grid race from second and while Jack Barlow led the field off the line, Herta edged ahead on lap three.

Herta’s move was soon followed by a safety car period thanks to Ameya Vaidyanathan‘s trapped car following a tangle with Oliver Pidgley.

After the restart, Herta stormed away from the field to see the checkered flag 3.5s in the clear.

The other star of the race was Dan Ticktum, who fought his way up to second from tenth. The Briton was already fifth when the caution came out, then quickly passed Enaam Ahmed and Tarun Reddy before inheriting second from Barlow, who received a drive-through penalty for a jump start.

The podium was completed by Sennan Fielding, while Toby Sowery took the best finish of his campaign in fourth.

Reddy took fifth despite running third for most of the race, followed by the Arden duo of Ricky Collard and Ahmed.

Lando Norris was unable to progress throughout the race and ended up eighth, while the top ten was completed by Jack Butel and Josh Smith.