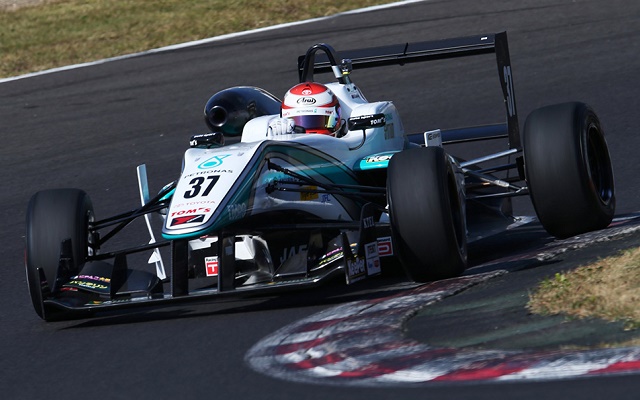 Nick Cassidy has secured a crucial lights-to-flag victory in the opening race of the final Japanese F3 round at Sugo, as rival Kenta Yamashita finished fourth.

Teammates Cassidy and Yamashita entered the final round level on points but the Kiwi’s win now sees him 10 points clear with one race to go.

A stellar start from pole allowed Cassidy to check out early on, the New Zealand racer establishing a 1.5s gap out front after the first lap and stretching it to 8s at the chequered flag.

Lucas Ordonez, who was 0.003s away from a maiden pole in qualifying, had a similarly lonely race and ended up equalling his persona-best result of second.

A lap after Alex Yang became the race’s only retirement, sliding off into the barriers on entry into the S Curve, Yamashita slowed on the main straight and was reeled in and passed by Nirei Fukuzumi for third.

Yamashita recovered and nearly retook the spot at the chequered flag, but ultimately came up less than a tenth short of a podium finish.

To become champion, Yamashita would need to win the final race and have Cassidy fail to score, which would give the Japanese driver the title on countback of third-place finishes.