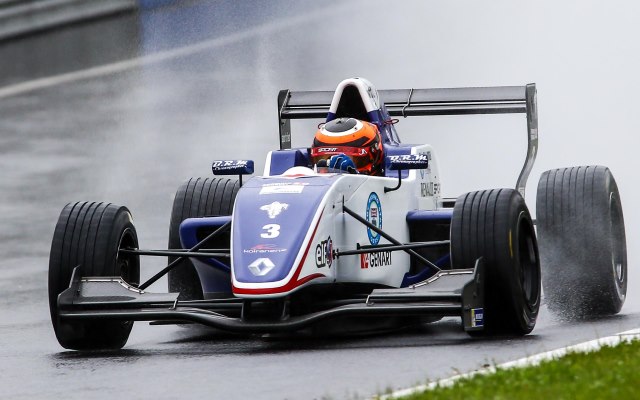 Jack Aitken took a commanding fourth win of the Eurocup Formula Renault 2.0 season in a wet, red-flagged opening race of the final round at Jerez to move to the top of the championship.

From pole position, the British driver led under the safety car in treacherous conditions until a red flag after several cars stopped with technical problems at slow speed.

When the race eventually got going for real there was only 10 minutes of racing but Aitken pulled away from the rest, finishing up 14 seconds clear of Kevin Jorg.

He therefore eliminates the seven-point deficit he had to the Swiss driver, and tops the standings courtesy of four wins to his rival’s one. He will also start race two from pole.

Jorg held onto second throughout but there was a change for third on the last lap when Ben Barnicoat slowed, allowing Ignazio D’Agosto to inherit his first Eurocup podium since September 2014.

Louis Deletraz also gained a place to finish fourth, but that wasn’t enough to stop him losing the championship lead he had held since the opening race of the season. He is six points behind Aitken and Jorg with two races left.

Dennis Olsen would have finished behind Deletraz but was another last-lap casualty, allowing Jake Hughes to finish fifth having started 10th, ahead of Matevos Isaakyan.

Anthoine Hubert was another on a charge, coming from 16th on the grid after getting caught out by the weather in qualifying to finish seventh despite the limited number of racing laps.

Martin Kodric led a gaggle of cars across the line to take eighth, with Ukyo Sasahara and Harrison Scott close behind. Simon Gachet had been battling with them before a trip through the gravel.

Hubert, Hughes and Barnicoat make it six drivers still in mathematical title contention, 27, 39 and 47 points respectively behind Aitken and Jorg.