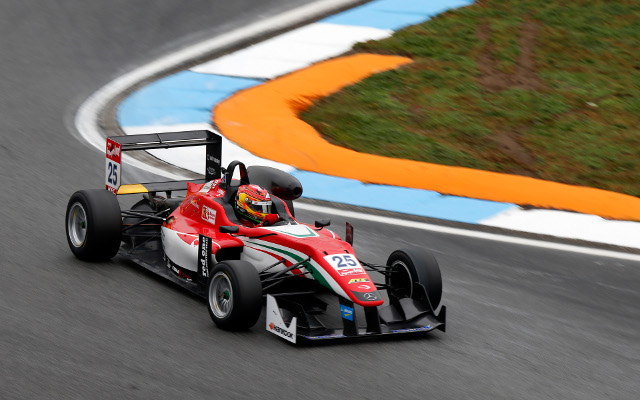 Though the Canadian had started sandwiched between his more experienced team mates, he was able to get ahead of pole sitter Felix Rosenqvist on lap one, and kept it for 22 laps as Prema Powerteam took another podium lockout, as well as their 19th win of the season.

The action started?before the race had even begun as Alexander Sims made a mistake on the formation lap, pitching his car into a spin on the grid as he exited the last corner. He was able to catch the car and join the rest of the field for the start.

As the lights went out, newly-signed Prema driver Maximilian Gunther had a slow start from the front row, which allowed Stroll and Jake Dennis to get ahead of the German by the first corner.

There were numerous incidents across the first half of the lap involving several drivers, eventually bringing out the safety car for Andy Chang?s stricken Fortec car.

Just before the safety car was deployed however, Stroll made a decisive pass down the inside of the Mercedes corner on Rosenqvist, giving him the lead just as the safety car boards were shown.

Stroll led the field when the safety car pulled in and was able to keep enough of a gap behind him to hold off the Swede despite locking up heavily into the hairpin.

Rosenqvist himself was then passed for second position into the hairpin by a late-braking Dennis.

The fight for fifth position was heating up between Antonio Giovinazzi, Sims and Charles Leclerc, with Sims eventually managing to pull off a move into the Mercedes corner on Giovinazzi despite failing a lap beforehand.

George Russell was able to then catch up to this battle and pass Leclerc with the switchback into the hairpin, relegating the Monegasque driver into eighth.

Despite Dennis pressuring Stroll for the lead for most of the race, the four Prema cars held station until the end.

The quartet of Stroll, Dennis, Rosenqvist and Gunther were followed by Sims in fifth, Giovinazzi, Russell and Leclerc.