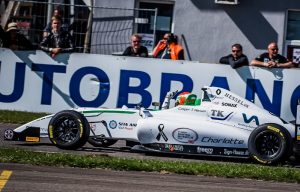 Casper Tobias Hansen came out on top from a poorly contested Danish Formula 4 opener, which included a race won by a Formula 5 car.

Former F5 star Hansen made the graduation to F4 look easy, winning twice and finishing third in the other race.

He started his weekend with pole, and had an easy run to his victory in the first race at Padborg Park.

Aske Nygaard Bramming, who beat Hansen to the F5 title last year, initially ran second but was one of many whose car seemed to struggle in the heat and ended up retiring.

His eighth place finish meant he started the second race from pole, the first time reversed grids had been used in Danish F4’s history, and Nielsen remarkably held off the F4 runners to take an overall victory.

The F5 car was faster in a straight line, while the F4 cars were stronger in the corners. This made for a particularly interesting battle on a circuit light on corners.

Grundtvig came closest, but could not find a way through and finished half a second behind the race winner. He got full points in the F4 classification though, and importantly recorded some early success for the 15-year-old’s self-run team.

Hansen climbed up to third from eighth, benefiting from a later error by Jonas L Nielsen to take the final podium place.

Hansen started back at the front for the final race of the weekend, and dominated. Grundtvig took another second place, and second in the standings, while Casper Pilgaard put gearbox issues behind him to take his first points of the season in third.

Eriksen just beat Jakobsen to fourth, with Kikkenborg and?Aske Nygaard Bramming taking it to a photo finish for sixth, of which Kikkenborg was triumphant.

Martin H. Nielsen was the only F5 runner to enter the race, finishing a lapped eighth, while Dias and Jonas L. Nielsen were both disqualified.