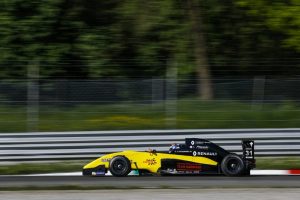 While Colombo and Lundgaard battled up front, title rivals Yifei Ye and Max Fewtrell clashed and spent their races back through the order from the back of the field.

Lundgaard waited until halfway through the 16-lap race to make his move to the front, by clinically passing the Italian driver around the outside of the della Roggia chicane.

Colombo kept Lundgaard under pressure after that, but the Danish driver resisted the attacks of the Italian ? even with a lockup late on.

This result means that the series has had four different race winners from the first four races of the season.

JD Motorsports driver Colombo finished in second place, and should be happy with a brilliant start to initially put him self out of Lundgaard’s way, and two subsequent restarts following two safety car periods.

The first incident involved Alex Peroni, who was chopped by Alexander Smolyar on the pit straight. Peroni then hit the wall and rebounded back onto the racing line, where Axel Matus and Vladimir Tziortzis were unable to avoid the MP driver.

The second incident was for Red Bull junior driver Neil Verhagen ? who appeared to go off on his own accord.

The event was a disaster for former points leader Fewtrell, who leaves Monza with no points added to his tally. The R-ace GP driver had contact with race one victor Ye at the Ascari Chicane after the first restart, and both lost many positions as a result. Fewtrell could only recover to 11th?place, while Ye limited his damage to seventh.

Eurocup veteran and former rival of Norris, Max Defourny made it two MP drivers on the podium, after resisting late pressure from Logan Sargeant.

Sargeant worked his way up to fourth place after a lengthy battle with Victor Martins, although both eventually escaped from the entertaining battle for sixth, that involved five drivers at one point.

There was a scary near-miss moment late in the race, after Charles Milesi damaged his front wing on Raul Guzman at the della Roggia chicane, and then proceeded to launch over the sausage kerb, nearly t-boning two drivers.

UPDATE:?Ye was given a 10-second penalty for causing the collision with Fewtrell, dropping him to 15th and promoting Fewtrell into the final point-scoring position.