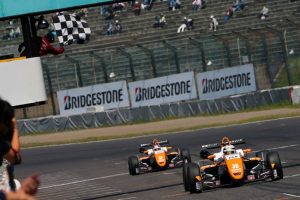 Sho Tsuboi made it 11 wins out of the last 13 Japanese Formula 3 races as the 22-year-old started his third attempt at the title.

The 2015 Japanese Formula 4 champion lost out on the F3 title by eight points last year, and he returned this year as the favourite with the TOM’s team.

Team-mate and successor as F4 champion Ritomo Miyata also returned, and the pair locked out the front row in qualifying. Miyata was surprisingly the one on top and he took his first pole position.

That advantage was gone when Miyata had a slow start, but he didn’t let Tsuboi escape and finished less than three quarters of a second behind to match his best finishing position for a sixth time.

Toda Racing’s Sena Sakaguchi was the best of the rest in third, a distant 12 seconds off, and was Toda’s only driver in contention for points after team-mate Toshiki Oyu failed to get off the line, was rolled into the pits and then stopped again just after the pit exit. He finished 14th, one lap down.

Formula Renault Eurocup race-winner Ukyo Sasahara finished fourth, and would’ve had Shunsuke Kohno behind him if the pair hadn’t collided a third of the way through the race. Former Formula V8 3.5 driver and Euroformula Open winner Yu Kanamaru inherited fifth as a result, with Bruno Carneiro taking the final point in sixth.

Okayama Team driver Yoshiaki Katayama would also likely have finished in the top 10, but a spin at the hairpin on the first lap led to him retiring from sixth.

Tsuboi started from pole for the second encounter, which followed a similar path to the first as the leader made sure he had a few car lengths over his team-mate throughout.

This time the end gap was over a second, and Sakaguchi was once again a very distant third.

Katayama demonstrated his pace with fourth place, which he took with a six second gap over the gaggle of cars fighting for the final points.

Kanamaru won this battle, with Carneiro the taker of the final point, both repeating their finishing position from the first race.

Stalling at the start relegated Sasahara to the back, but he fought back up to seventh, and was within two-and-a-half seconds of fifth by the end.

Eighth place went to Kohno, with Oyu and Nemoto completing the top 10.