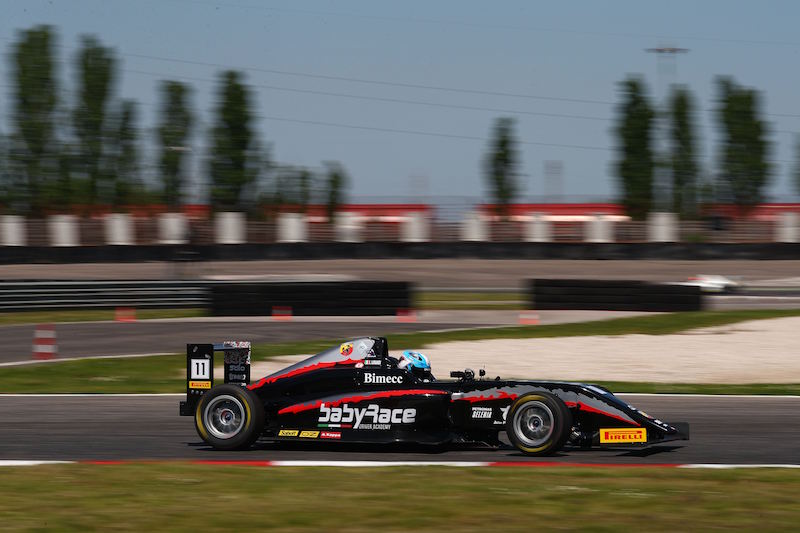 Bhaitech driver Leonardo Lorandi claimed his first win of the season after starting on pole for the second Italian Formula 4 race at Adria.

Lorandi held onto the lead on the opening lap but came under fire from Prema Powerteam?s Gianluca Petecof and Enzo Fittipaldi before an early safety car neutralised the field.

After the safety car, Lorandi was able to get away from the two Prema drivers as they battled for second and finished 1.484s ahead of Petecof.

Petecof resisted pressure from Fittipaldi in the closing stages of the race to take his first podium of the second. Fittipaldi completed the podium in third ahead of fellow Prema driver Olli Caldwell.

Behind them was a four-way battle for fifth.

Ian Rodriguez held the position for the majority? of the race, but he had the Jenzer Motorsport trio of Gregoire Saucy, Javier Gonzalez, and Federico Malvestiti right on his tail.

Saucy pushed hard to find a way past, running alongside the DRZ Benelli driver on multiple occasions, but Rodriguez always held the inside line.

Saucy eventually found a way through and quickly built a gap to Rodriguez. He cut the gap to Caldwell to less than two seconds, but ran out of laps before he could catch the Prema driver.

Gonzalez picked up where his team-mate left off, searching for a way past Rodriguez. The pair came together when Gonzalez hit the back of Rodriguez?s car, damaging his own front wing. He dropped down the order, finishing P10.