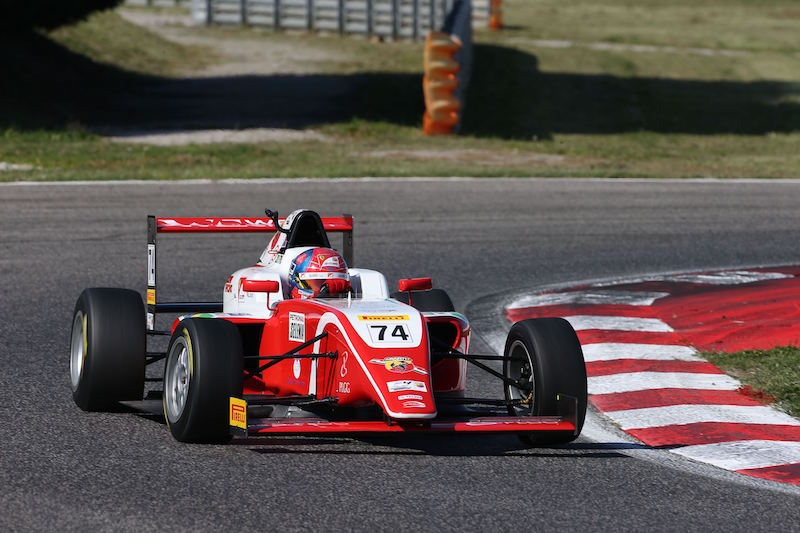 Enzo Fittipaldi beat Leonardo Lorandi by less than a tenth of a second to take victory in the final Italian Formula 4 race at Adria.

The Prema Powerteam driver led from lights to flag, but came under pressure from Lorandi after a late safety car bunched up the field.

Lorandi, who had started fourth, spent the first part of the race battling with Gianluca Petecof and Federico Matvestiti for second, allowing Fittipaldi to escape up the road. He managed to put Petecof and Matvestiti behind him and set the fastest lap of the race in an attempt to close the gap to the leader.

Further back, Aaron di Comberti ran over the top of William Alatalo just before the pit entry.

The incident began half a lap early asAlatalo battled with Petr Ptacek. The pair ran side by side, making contact on a number of occasions, and Alatalo’s rear wing came off as he ran over kerbs at the chicane.

Alatalo was braking to enter the pit lane when di Comberti, not seeing the other car was braking, ran over the back of him, bringing an end to both their races.

With 13 minutes on the clock, the safety car was brought out to recover the two stranded cars, putting Lorandi back on Fittipaldi?s tail.

Fittipaldi couldn?t shake Lorandi on the restart but their battle for the race lead was briefly interrupted by Ian Rodriguez, who had taken P3.

Rodriguez tried to challenge Lorandi for second, running side by side with the Bhaitech run car, but he ran wide and dropped down the order, coming into the pits two laps before the chequered flag.

Lorandi immediately returned to challenging Fittipaldi. He managed to pull up alongside the Prema driver on the final lap of the race and the pair took the chequered flag almost in unison, but Fittipaldi just had the edge, finishing just 0.076s ahead.

He leaves Adria top of the standings, four points ahead of Lorandi.

Javier Gonzalez, having passed Toby Sowery after the restart, picked up the final podium position.

Gregoire Saucy couldn?t find a way past Sowery and had to settle for fifth, ahead of Giorgio Carrara and Petecof, who dropped down the order after being passed by Lorandi early in the race.

Olli Caldwell, who had a difficult start, finished P8, ahead of Malvestiti and Umberto Laganella.